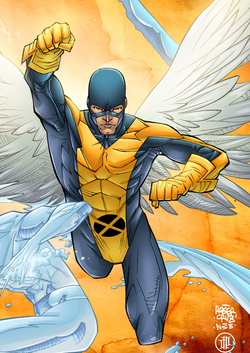 I can feel my wings, strapped on to my back whenever I'm in public. Please, Dad, I don't want to do this anymore. Let me fly. Please.

Born into the wealthy family known as the Worthingtons, signs of Warren Worthington III's mutation were visible since birth. Like his father, he had unusually-shaped shoulder blades. Despite the doctor who birthed him telling this, the elder Warren denied his son's mutation. As he grew into his teens, however, a large pair of white feathered wings protruded from his shoulder blades. Knowing that his father disapproved of mutants and all powered beings, Warren III requested to go to boarding school in New Hampshire, far away from his father's lab in California. His father agreed.

Upon moving into school in New Hampshire, tragedy soon struck. Someone set the school on fire, endangering the lives of many students who were trapped inside. Donning a wig from the theater department, Warren flew into the school to rescue the students, among whom was Cameron Hodge, who would be forever grateful to Warren. Returning home, the pain from exhausting his flight led to his father discovering his secret. This led to the elder Warren resuming his work on curing mutations, and the government began to take notice of Warren as well.

Having felt an exhilaration he had never felt before, both physical from using his wings and mental from saving people, Warren decided to continue these outings. Using a few costumes from a nearby costume store, as well as one of his best suits, he declared himself the Avenging Angel, and set out to fight crime in the state of California. When he returned from his first night of hero work, however, his father kept him from entering as he had seen him in action. Furious, Warren denounced the Worthington name, and began a life of mixed crimefighting and crime as he burglarized places in order to sleep or eat.

Meanwhile, Warren Jr. was having sibling troubles. Angel's uncle, Burtram, was attempting to steal Warren's wife and kill her in order to inherit the family fortune. Warren caught onto the scheme, and attempted to stop his uncle. However, in the conflict, Kathryn Worthington was killed. Distraught, Burtram lashed out, but Angel managed to defeat him. Enraged at losing his wife and brother, Warren Jr. threatened to kill his son, but instead hit him with a temporary prototype version of cure, allowing government agents to move in and take the younger Worthington away.

Having been dragged to a top-secret Weapon X base, Warren was brainwashed by Mesmero into joining Weapon X's mutant strikeforce, Team X. Here, he was outfitted with military gear and a rifle, and codenamed the Fallen. He only served for a minor stint in the team, but he managed to take several innocent mutant lives, and faced several foes he would encounter again as an X-Man. He broke free of his mind control and left long before the famous era where Logan joined the team. How he managed to break free of his mind control is also yet unknown. It is known, however, that he held onto this more violent personality, becoming a darker vigilante in his return as the Avenging Angel.

Aerial Adaptation: Angel's body is naturally adapted to flying. He has hollow bones, his body does not store any excess fat, and he possesses a greater proportionate muscle mass than normal. As a result, his strength, speed, agility, flexibility, endurance, reflexes, coordination, balance, eyesight and hearing are at their peak. Many elements of his anatomy are comparable to those of birds, particularly birds of prey. His eyes can withstand high-speed winds which would damage a human eye. He can breathe at intense heights and speeds, and he can cope with cold temperatures at high altitudes.

Warren is a skilled combatant, as well as a very savvy businessman. Warren has also mastered a technique allowing him to use his wings as blades, in addition to being a skilled swordsman.

Retrieved from "https://marvelcomicsfanon.fandom.com/wiki/Warren_Worthington_III_(Earth-166)?oldid=172951"
Community content is available under CC-BY-SA unless otherwise noted.