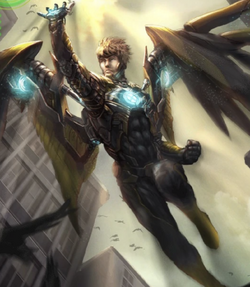 Earth-12891
Base Of Operations
The Nexus
Characteristics
Gender

Don't get me wrong, these mecha wings are pretty badass, but... nothing will ever compare to the feeling of stretching my wings first thing in the morning and going flying to clear my head.

Warren Worthington was bred from a young age to one day inherit his father's company. Worthington Industries worked closely with Stark Industries, which led to Warren and Tony Stark becoming close friends. When Warren reached puberty, his mutation began to take effect, and he started growing wings. Too nervous to tell his xenophobic father, he confided the truth in Tony, who told him about his father's old business associate, Charles Xavier.

As soon as he became old enough, Warren sought out Xavier, and eventually discovered him in his home in Westchester, having lost hope of ever recruiting any mutants suitable for championing his cause. However, Warren's arrival revitalized his beliefs. Warren and Xavier decided to team up and locate mutants from around the world, eventually recruiting the likes of Jean Grey, Ororo Munroe, Scott Summers, and James Howlett.

As they began training and preparing to make their public debut as a team, Warren received word that Tony Stark had been kidnapped by terrorists. Despite warnings from Xavier, Warren set off to rescue Tony, and arrived just in time to discover him breaking out after having built his very first Iron Man armor.

Warren and Tony were overjoyed to see each other once more, but as they were distracted, Warren was blasted in the back with a tank missile. He blacked out from his injuries, and Tony was barely able to escape and save them both. Warren was eventually settled into an American hospital, and the doctors quickly determined the damage to his wings was too extensive. His father, who had always despised mutants, told the doctors to amputate them.

When Warren woke, he was enraged and horrified. However, Tony was there for him, and had been making strides with his Iron Man armor. He promised to help Warren build new wings using his arc reactor technology, and it wasn't long until he had his own fully functioning suit of armor, equipped with large mechanized wings, capable of both offense and defense. He eventually made his debut as the Iron Angel, Iron Man's partner, and went public with his status as a mutant. Xavier was proud of him, and Warren made him an enticing offer. As Iron Man began recruiting other heroes from across the globe to form the Avengers, Warren proposed for Xavier to integrate the team they put together into the Avengers to make a stand as mutants defending the world.

Xavier and Iron Man both thought it was a fantastic idea, and eventually the Avengers made their public debut, consisting of Iron Man, the Iron Angel, Mento (Xavier), Black Panther, Storm, Wolverine, Ant-Woman, and the Hulk. Scott and Jean neglected to join the team, and decided to retire to get married. The Avengers quickly gained worldwide popularity, and the Iron Angel was eventually elected team leader. Over the years, he and Ant-Woman had an on and off relationship, and eventually broke things off for good when she got engaged to Iron Man.

Angel then decided to throw himself into his work, which became complicated when the Hulk was driven insane and went on a rampage in New York City. As the Avengers held him off, Angel focused primarily on rescuing citizens. This put him directly in the line of falling debris, which would have claimed his life. However, rather than dying, Angel was transported to the Nexus, a place outside the multiverse.

It was there that Angel was faced with various mutants from the multiverse, including Cyclops, Scarlet Witch, Beast, Sub-Zero, and Apocalypse. As the six of them tried to come to grips with what was happening, they were approached by the extradimensional being, the Silver Sentry. He explained to them that their time in their home realities had come to an end, and it was now their responsibility to right wrongs across the multiverse. Angel was chosen as the team leader, due to his background leading the Avengers, and was outfitted with the Tallus, an extradimensional gauntlet that gave the Team universal powers.

Angel was reluctant to go along with the Team, but accepted his fate, feeling inclined that he had nothing to return to in his home world. He then proceeded to lead the team on countless missions, earning the respect of each of his teammates. However, he found himself sorely lacking in friendships. He missed Tony and Janet, but felt awkward around his teammate, the Scarlet Witch, who had been married to an alternate version of him.

Eventually, after Apocalypse's sacrifice, Angel became close with his new teammate, an alternate version of Storm, to the point where they were close to getting intimate. But of course, their timing was not perfect. Team X soon found themselves in a reality where the robot Ultron had destroyed the Moon to destabilize humanity. Team X's mission did not have anything to do with confronting Ultron, but it was rather to help the Avengers construct a new moon to prevent humanity's extinction. Of course, Ultron made his way to Asteroid M, where the Avengers had set up shop, in an attempt to stop them.

Angel volunteered himself to fight off Ultron so they could complete construction, and he ended up exhausting all of his armor's power, eventually resulting in Ultron impaling his arm through Angel's chest, killing him, just as Team X completed their mission.

Retrieved from "https://marvelcomicsfanon.fandom.com/wiki/Warren_Worthington_III_(Earth-12891)?oldid=252785"
Community content is available under CC-BY-SA unless otherwise noted.