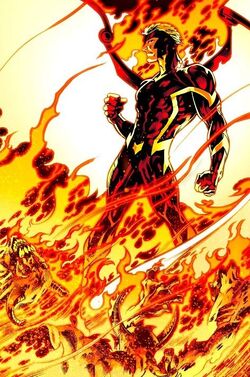 I used to think I was just the pretty face of the X-Force, but after everything I've been through I've started to realize I'm just the poor fool.

The only son of business mogul Warren Worthington II, Warren always felt overshadowed by his father. When Warren turned ten, he started growing wings, which at first made him think he was an angel. When he showed his father, however he became horrified and sent Warren to one his company's lab to immediately be tested on. It was there that his mutant DNA was uncovered, and his father became disappointed in himself for bringing a mutant into the world.

After spending years being kept hidden by his father, Warren is approached by the mutants Charles Xavier and Erik Lehnsherr. Warren went with them and began attending the Xavier Institute alongside the other mutants, Jean Grey, Hank McCoy, Raven Darkholme, and Ororo Munroe.

After a schism between Xavier and Lehnsherr, the teams X-Force and the Brotherhood were formed in opposition of each other, and Warren sided with the X-Force under the codename of Angel. After serving with X-Force for years and becoming close friends with many of his teammates, Angel suffered an injury during a battle with Sentinels that broke his wings. His father then took the opportunity to have his wings surgically removed, which enraged Warren.

Desperate for his power back, Warren was approached by Mister Sinister, who offered to fix him. Failing to think of the consequences, Warren agreed and was then experimented on extensively by Sinister. When he awoke, his wings had been refashioned with synthetic flames and his mind overwritten by the Horseman of Death, turning him into a loyal servant of the mutant God Apocalypse.

Dubbed the Archangel, he was then put in charge of the other Horsemen, Famine, Pestilence, and War, in the fight against the X-Men and the Brotherhood. The Archangel was even able to access Warren's memories, but was filled with more rage which led him to attack his father. He was opposed by the X-Force members Cyclops and Wolverine. Archangel was then able to call in his reinforcements which kept them busy as he executed Warren Worthington II.

When the resurfaced Sentinels were sicked on Apocalypse and the Horseman, Warren was able to break free, which allowed him to rescue the other Horsemen and help finish the fight against Apocalypse. Unable to reverse the transformation into the Archangel, he felt he was no longer worthy of being in the X-Force. However, after overwhelming encouragement from his friends, he agrees to come back to try and redeem himself.

Super Strength from Transformation into Archangel

[[Category: In a Relationship with Alison Blaire Characters]]