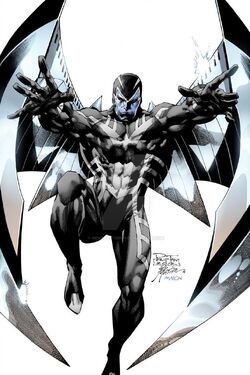 It will end, Apocalypse... It'll end now, and it'll end with your death!

Warren Kenneth Worthington, Jr., more commonly known by the public as Warren Worthington II, had grown up with his uncle after his both of his parents have died. Many knew him as a really nice, humble and, a lovable person to his friends and family. He was so humble, he even treats his bullies and other enemies same as he treats his closest friends.

He first discovered his mutant abilities of having organic wings when he was still in college, when he was about to fall into a cliff causing for his mutation to trigger, saving him from death. After he manages to get back up to the cliff, he immediately went home and hesitantly told his uncle about having wings. Thankfully his uncle wasn't shocked and didn't become scared about his nephew after hearing that he was a mutant, though he was worried that Warren might be rejected by the mutant-hating society. Because of this, his uncle called a man he knew who would seem to help his nephew in his current situation of discovering his mutant powers.

This man was known as "The Man in Black," who later sent another man and who was revealed to be Charles Xavier, a mutant who recruited Warren to a special C.I.A. team known as the Division X, a special mutant team. Warren agrees to join so he could do some good even though his uncle declined it at first, thinking that his nephew might get in trouble. Xavier promised his uncle that he would help and teach Warren control his powers and his nephew would be safe before leaving his home.

Warren was trained and was helped to control his powers until he successfully manages to master them. He was later been given the name by his teammates, Archangel. During their battle with the Hellfire Club, Warren even managed to defeat Riptide, a member of the supervillain team, whom he prevented from creating massive cyclones that could've destroy the villages on the island if he didn't stop him in time, though the result of their battle had damaged and broke both Warren's wings.

After the following events, Warren retired from becoming an X-Man and became one of the first and oldest student of Charles' newly-established academy, Xavier's School for Gifted Youngsters where he finished his education before departing and starting a new life in the world as an inspired entrepreneur. He later met a woman named Kathryn, who they became romantically involved since she still accepted him despite the fact that he is a mutant. They would later get married and conceived a child together in which they have also named, Warren (III) after himself since Warren and his son look similarly alike since he was first born.

Warren seemed to be living a normal and precious life when he became a multi-millionaire after founding his own company, Worthington Industries, until the powerful mutant Apocalypse had reawakened from his "burial," in which he began searching for mutants that could become one of his Horsemen. Becoming Apocalypse's Angel of Death, Warren greatly helped him and his fellow horsemen in accomplishing his first goals during his reemergence to the world.

However, during the final battle, when Warren saw his master dishonor and oppress his fellow mutants no matter how innocent they were, Warren manages to snap out from Nur's manipulation and regain his own will as he, along with his fellow horsemen, finally realized he was on the wrong side to begin with and turned against him, defeating the unhinged mutant messiah in the very end.

Shortly after Apocalypse's defeat during his reawakening, he was given a chance by his friends, especially Professor Xavier himself, to rejoin the X-Men once again and continued his new career as a professor at Xavier's School for Gifted Youngsters, where he finished his education when he was younger.

During the final battle in Sokovia, Warren and his son, Warren III alongside several mutants manages to corner and weakens Mister Sinister, until Sinister absorbed the numerous powers and abilities from several mutants, causing for Sinister to successfully kill most of them, including the Brotherhood member Pyro, leaving Warren and Warren III. Warren and Warren III tries to attack Sinister but they were easily defeated, leaving Warren into a critical condition for a moment.

Sinister now has the upper hand on killing Warren III, but Warren immediately charges onto Sinister and flies him away towards an abandoned city, crashing him towards several buildings, seemingly defeating the villain, until they accidentally crashes into an active thermal power station, causing for the whole building to collapse and explode, killing and injuring a few number of civilians.

Warren is mortally wounded, but he manages to survive and is started healing rapidly, until a disfigured Sinister suddenly lunges at Warren and absorbs all of his powers, draining him including his healing factor, causing for Warren to slowly die from his injuries, but not before he secretly puts a undetectable tracker onto Sinister, before he left him to die.

Because of his heroic sacrifice, Warren was buried along with Pyro and other fallen mutants at Xavier's School for Gifted Youngsters, making them an inspiration to several mutants to join the X-Men to honor their memories. Warren was never forgotten by his beloved son, for he was the very one who kept on motivating him to become the hero, he had always wanted to be, his eventual successor, his Angel.

Homo Superior Physiology: Warren is a mutant who has the ability of winged flight but later, Apocalypse warped his body and mind into his own "Angel of Death" upon his Celestial Ship and placed him into his team of Horsemen as Death. Warren's skin turned blue and causing for him to grow a bio-metallic set of wings from his back that could retract and also fire dart blades with a neurotoxin. Warren's new wings could fly higher, faster, and were razor sharp.

Retrieved from "https://marvelcomicsfanon.fandom.com/wiki/Warren_Worthington,_Jr._(Earth-61615)?oldid=225356"
Community content is available under CC-BY-SA unless otherwise noted.