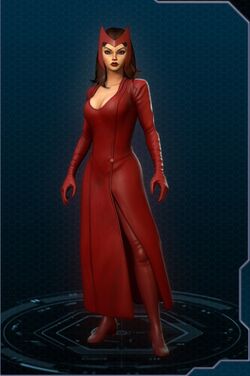 Born at the Wundagore base of the High Evolutionary, Wanda and her twin brother Pietro are the children of Erik Lehnsherr and were eventually placed in the care of a Romani couple named Django and Marya Maximoff, from whom they were separated as teens when their encampment was attacked. They were later recruited into Magneto's Brotherhood of Mutants and, as the Scarlet Witch and Quicksilver, fought the X-Men.

Wanda was also shown to easily wipe any in her own illusory reality from existence with but a thought.

Wanda Maximoff is actually considered the very "nexus-being" of the universe of Earth-727, serving as the entity that personifies the realm's character and serves as the focal point or anchor of that reality.

As the spell causing the Decimation only affected mutant-based powers, Wanda is still perfectly capable of wielding magic.

Wanda's ability to channel and wield magical energy was brought about by the demonic sorcerer Chthon. On the day that Wanda was born, the ghostly specter of Chthon visited the newborn Wanda and "blessed" Wanda so that Wanda could channel the dangerous Chaos Magic that was the basis for Chthon's unholy might. Chthon's intentions were to create a vessel that he could possess one day, when Wanda was a full-grown adult.

As such, due to Chthon's "blessing", Wanda is also vulnerable to having all of her powers disabled if Chthon is ever disrupted.

Wanda's power to alter reality itself was spawned from the combination of her natural mutant abilities to affect probability and Chaos Magic. Because of her ability to warp reality, Wanda is one of the most powerful Marvel beings.

The Scarlet Witch possesses the normal human strength of a woman of her age, height, and build who engages in moderate regular exercise.

Overextension: Despite this enhanced precision, her hexes were not necessarily guaranteed to work, particularly if she had been straining herself or using her powers excessively. If overextended, her hexes could backfire, causing probability to work against her wishes or to undo previous hexes.

Retrieved from "https://marvelcomicsfanon.fandom.com/wiki/Wanda_Maximoff_(Earth-727)?oldid=100886"
Community content is available under CC-BY-SA unless otherwise noted.