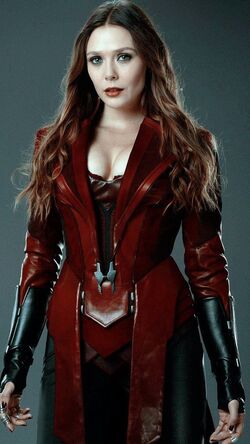 Dating
Occupation
Member of the Avengers (currently)
Education
Xavier School for Gifted Youngsters (graduated)
Origin
Origin
Born a mutant to Magneto and Hilda Maximoff, Wanda grew up in the streets of Berlin, Germany before being taken under the care of Professor X. She later leaves the Xavier Institute and joins the Avengers led by Captain America and Iron Man later on.
Place of Birth
Munich, Bavaria, Germany
Creators

You can call me a monster, but know this: I am here to make sure your asses are safe or else you all will be dead!

Wanda Astrid Hertha Maxmimoff was born in Munich, Bavaria, Germany to Helena Maximoff and Max Lehnsherr. After Max walked out on the family and her mother passing away from suicide, Wanda along with her twin brother, Pietro was sent to an orphanage where their powers began to surface. Pietro was able to embrace his which was supersonic speed while Wanda began to face the shunning due to her powers being magic. She was treated horribly while Pietro was praised and it reached to her breaking point when she runs away from the orphanage, leaving Pietro behind. She snuck a train and rode her way to Berlin where she ended up surviving the streets.

But it became harder for her, for the people began to notice her mutant powers and quickly make their getaway from her. Like what had happened back in the orphanage, began to taunt her and even threw rocks at her when the tried to ask for help, causing her to snap angrily, unleashing her powers on her attackers before running into an alley, hugged herself and cried. Moments later, Wanda was approached by a man who goes by the name Charles Xavier or by the name Professor X who catches her crying. With his ability to read her mind, Professor X decided to bring Wanda back to America where she was enrolled in the Xavier School for the Gifted Youngsters, where she was able to come to terms with her powers and be able to master them.

After years in the Xavier Institute, Wanda graduates from the school and was offered to join the X-Men but Wanda chose not to due to wanting to live a normal life. She took a job at a local bookstore/coffee shop at Downtown Manhattan where she got comfortable living a stable life in New York City. However, her life began to change when she saw the HYDRA led by Doctor Octopus and Red Skull and the bookstore was attacked right before the Avengers came into action and fought the HYDRA.

It wasn't until she saw the dead bodies all over, including her boss who laid lifeless. In anger, she walks out of the destroyed building where she saw the Avengers fight the Sinister Six of HYDRA and she unleashed her mutant powers, blasting every villain and blocking any attacks inflicted by them. This caught the Avengers' attention, watching her fight the villains forcing Doctor Octopus retreat. Amazed by her abilities, Wanda was offered to join the Avengers, but as she did before, she turned them down only to be offered an Avengers communicator by Iron Man, telling her that it was never too late to change her mind. As Wanda left the scene she began to think about the times where she had gotten her powers and how Professor X made her realize that her powers can be used to save and protect people. She eventually returned to the Avengers, accepting the offer to join the team.