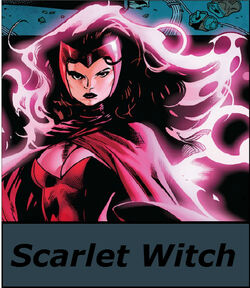 When Magneto started gathering mutants for his Brotherhood of Evil Mutants, he meant to show the world that mutants are superior and will no longer be afraid of humanity. Wanda joined the group without knowing that he's her father, but later their relationship was revealed.

When Magneto started working with Mr. Sinister on the mutant enhancement project, Wanda aided him until she fought the X-Men again and finally understood what exactly was their mission and escaped from the Brotherhood to the X-Men.

Expert Knowledge of Sorcery: Wanda was trained by Agatha Harkness in witchcraft. Her sorceress training has not given her a set of powers separate from her mutant abilities, but only honed her control over her existing abilities. She has, however, a special affinity for the natural elements and materials that witches utilize in their spells: the four alchemical elements, wood, organic substances, etc.

Expert Combatant: Wanda has also been trained in hand-to-hand combat by both Captain America and Hawkeye.

Expert Tactician: When sane, the experience and leadership skills that come from years of active duty as an Avenger.

Normal strength of a woman her age,her size,height and build who engages in moderate regular exercise.

Mental Illness: Although Wanda appears to be currently sane, her mental stability is still questionable.

Perception Range: Her range of hex-casting was limited by her line of sight. (She couldn't watch a live television broadcast and cause a hex-phenomenon to occur at its point of origin.)

Physical Condition: Hexes had a degree of unreliability, which was further affected by her physical condition: when well rested, in good health, and mentally and emotionally alert, Scarlet Witch could cast numerous hex-spheres in rapid succession and attain desirable results for almost an hour.

Overextension: Despite this enhanced precision, her hexes were not necessarily guaranteed to work, particularly if she had been straining herself or using her powers excessively. If overextended, her hexes could backfire, causing probability to work against her wishes or to undo previous hexes.

Equipment: None.
Transportation: The X-Men Blackbird
Weapons: None.

Retrieved from "https://marvelcomicsfanon.fandom.com/wiki/Wanda_Maximoff_(Earth-31184)?oldid=121389"
Community content is available under CC-BY-SA unless otherwise noted.