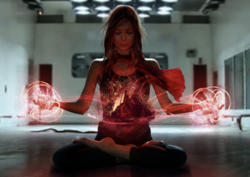 Piss me off and I will wipe your entire species off the face of the Earth.

Wanda was born 12 minutes after her twin brother, Pietro, to a pair of outlaws who had taken refuge in Wundagore Mountain. Their mother died while giving birth to Wanda and their father ran out on them. That left the twins in the care of the High Evolutionary, who almost instantly began experimenting on them. He soon uncovered their Inhuman DNA and exposed them to the Terrigen Mists when they were only 3-years-old.

While Pietro almost instantly began showing signs of super speed, Wanda still seemed fairly regular, albeit a little closed off. This resulted in the High Evolutionary dedicating most of his focus to Wanda, which Pietro eventually grew sick of. He took Wanda and ran them away to their Aunt Marya and Uncle Django, who he discovered live in Romania.

After they settled in with their family, Wanda began showing signs of her own powers. But they were much more complicated than Pietro's. It seemed Wanda tapped into the chaos realm to channel mystical energy capable of creating hallucinations, energy constructs, manipulating probability, and even moving objects through midair. The people of the village came to believe Wanda and Pietro were demons and rallied together against the Maximoffs.

Their aunt and uncle were killed in the riots and the twins went on the run once again. However it wouldn't be long until they were found by the mutant radical Magneto, who recognized the name Maximoff and believed them to be his children.

They were then coerced into joining his Brotherhood of Mutants. For the next few years they fought as Quicksilver and Scarlet Witch against the X-Force. However, it wasn't long until they became disillusioned with what Magneto and the Brotherhood were fighting for. They found themselves going on the run once more and were manipulated into working for the Hellfire Club.

This brought them into conflict with the Avengers, who saw past the trauma they had been put through. Captain America and Hawkeye were able to convince the twins that they were meant for so much more. Together, they agreed to join the Avengers and instantly fell in love being heroes.

They would also eventually uncover the truth about their Inhuman heritage, which resulted in a violent conflict with Magneto, who they blamed for misguiding and manipulating them. They then reached out to Black Bolt and the Inhuman Royal Family, who agreed to help them get in touch with their roots.

Retrieved from "https://marvelcomicsfanon.fandom.com/wiki/Wanda_Maximoff_(Earth-101)?oldid=247603"
Community content is available under CC-BY-SA unless otherwise noted.