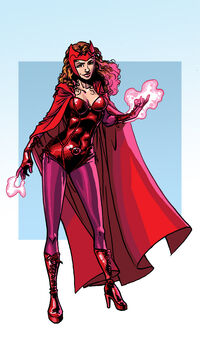 Wanda and her twin brother Pietro were born to mutants; Erik Luu and Magda Maximoff. After Magda discovered Erik had been causing havoc outside of the Savage Lands, she decided to take the twins and flee the Savage Lands, but Erik knew of this and attempted to stop her but Magda used her Mutant ability to escape although, with only one of the twins; Pietro.

Magneto would then swear to take care and protect Wanda with all his power.

Wanda was raised with other mutants in the Savage Lands. Wanda grew up hearing stories of her father's childhood and the destruction that Man causes, like her father she also grew to hate humanity.

Magneto had no ill-feelings toward his separated wife and would tell Wanda stories of how great her mother was and that he wished he knew what his son was like and wished that they could have stayed a family.

Upon turning 16, Wanda joined her father and the Brotherhood of Mutants in his terrorist attacks and would take on the name Scarlet Witch.

In the Savage Lands, Sabretooth would discover his half-brother, Wolverine was experimented on in the Weapon X project by Hydra and S.H.I.E.L.D. and demanded he and the Brotherhood go to the abandoned facility, to see if there's anything he could use to kill Wolverine or even lace his skeleton with vibranium as well. Magneto agreed to this as it could also prove useful to the Brotherhood as well.

So the Brotherhood venture to the Weapon X facility. Sabretooth would find some remnants of liquefied vibranium, without even speaking Magneto knew what Sabretooth wanted. After a few days of trial and error, Magneto successfully managed to infuse Sabretooth's bones with vibranium with his magnetokinesis. Seeing nothing of use with the remnants of the Weapon X facility, the Brotherhood begin to leave until suddenly Sabretooth catches a whiff of Wolverine's scent and goes into a frenzy, following it, discovering Wolverine and attacking him. He engages in a brief fight with him until Magneto orders him to stop.

The Brotherhood then come face-to-face with the X-Men. Magneto then greet the X-Men mockingly and accurately guesses that the X-Men are here to help Wolverine regain his memories, Wolverine asks who Sabretooth is and why he has claws like Wolverine's. Sabretooth laughs maniacally and reveals himself to be Wolverine's brother.

The X-Men begin to battle the Brotherhood. Wolverine and Sabretooth begin battling each other in more of a personal vendetta, their personal fight takes them away from the overall battle. Sabretooth begins gaining the upper hand on Wolverine and comments on how he was always weak and he'll pay for killing his father. Wolverine begins fighting back as hard as he can, never fighting anyone like Sabretooth before, his sudden rush of past memories begin returning to him and remembers a bit more of his past. Wolverine then remembers his father was killed by Sabretooth's father and enters a berserker rage, destroying Sabretooth and temporarily blinding Sabretooth like he did when they were children many years ago. Knowing he can't kill Sabretooth and that he is mortally wounded and will take a while to heal, Wolverine returns to help the X-Men combat the Brotherhood.

Her powers were developed to such a level that she could teleport with surgical exactness.

Even though she could control probability to prevent herself from being hurt, if caught off guard she could have been injured just as any normal human.

Retrieved from "https://marvelcomicsfanon.fandom.com/wiki/Wanda_Luu_(Earth-1111)?oldid=223403"
Community content is available under CC-BY-SA unless otherwise noted.