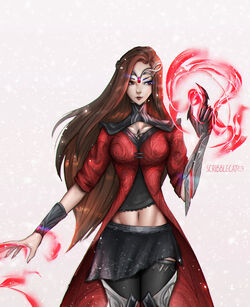 We will bring this world to its knees, and when it begs us to save it... we will whisper "no".

Wanda, and her twin brother, Pietro, were born to the dying Celestial, Exitar the Executioner, who journeyed to Earth for his last judgment. However, before he could pass judgment, he met the sorceress Natalya Maximoff, with whom he became enamored, and saw no better option for someone to carry his seed. He died shortly after, and Natalya herself died in childbirth. The children were then put in the care of Natalya's brother, Django, and his wife, Marya. However, Wanda's powers developed at the young age of four, and accidentally killed both of them.

Pietro and Wanda then went into hiding before eventually being found by the mutant revolutionary, Magneto, who believed them to be mutants. He felt sorry for the lost children, and took them in as his own. He raised them, and even recruited them into his team of mutant heroes, the X-Men. However, Wanda was always unstable. She had a madness inside of her that Magneto could not control. But what Magneto saw as a danger, Apocalypse saw as potential. He offered the Scarlet Witch the opportunity to let her power flourish in the way it deserved, and she agreed.

Wanda then became the Horseman of Pestilence, turning against her family, and giving in to her madness. Her power of chaos magic grew beyond anything she'd ever dreamed, to the point of even being able to alter reality.

Equipment: None known.
Transportation: Capable of Flight through Telekinesis
Weapons: None known.

[[Category: In a relationship with Johnny Storm Characters]]
Retrieved from "https://marvelcomicsfanon.fandom.com/wiki/Wanda_Lehnsherr_(Earth-9999)?oldid=245228"
Community content is available under CC-BY-SA unless otherwise noted.