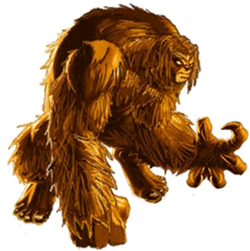 Blonde, ,orange fur (as Sasquatch)
Skin
Orange
Unusual Features
Sasquatch has wide shoulders, fur all around him and no neck.
Status
Citizenship

The Great Beasts used me, but they brought us all here for a reason. We're best when we're together. We can take down the Great Beasts, which means we have a chance against the Chaos King. They feared us, that's why they needed us to protect them. If we can join with the God Squad to help the fight... It's the Chaos King's turn to fear us. Live or die, we do it together. As Alpha Flight!

Dr. Walter Langkowski grew up in British Columbia. He went to Penn State University on a football scholarship, earning a degree in physics. Walter met Bruce Banner while he was a freshman. Although they only worked with each other for one semester, Langowski decided to focus on gamma radiation research. He played a few years for the Green Bay Packers, becoming very wealthy. He then continued his graduate studies at MIT. He was appointed to McGill University in Montreal. He studied all he could on the Hulk after learning that he was a transformed Banner. Guardian provided additional funding for a research facility at the Arctic Circle.

While on leave from the university, Dr. Langkowski began working on a gamma radiation experiment that could create a being like the Hulk, only under more controlled circumstances. Being bombarded by massive amounts of gamma radiation, Walter turned into a huge creature. He then went on a rampage until being found unconscious by Snowbird. Shaman and Snowbird helped Walter learn how to keep his personality and intelligence in his bestial form. He called himself Sasquatch noting the resemblance to the creature also called Bigfoot. After training in the Gamma and Beta Flight programs, he was accepted into Alpha Flight. He continued to research and teach at Simon Fraser University when not adventuring.

Physical Transformation: Originally, Walter had the ability to transform himself into his original Sasquatch form at will. While he originally believed his powers were the result of exposure to gamma radiation, the experiment he used opened a mystical rift and linked him with the Great Beast Tanaraq. Walter's Sasquatch form was actually Tanaraq's body and, while transformed, Walter possessed not only his normal personality and intelligence (at least for most of the time he possessed Tanaraq's form), but various superhuman physical attributes.

Physical Transformation: Walter can transform from his normal form to Sasquatch at will in much the same way as he originally did. At first he needed to enter a meditative state taught to him by Shaman and Snowbird. While he still retains his personality and intelligence in his transformed state and many similar powers to his original form, many of these powers are displayed as either not as advanced or on par with how they were before depending upon the issue.

Langkowski is a professionally trained scientist with experience dealing with many forms of experimental radiation and their mutagenic effects on lifeforms under controlled settings. As a former professional football player, Langkowski has highly athletic physical strength and endurance, though he is no longer in the peak condition of his life.

While transformed, Walter's body is covered with thick, Brownish-Orange fur that helps keep his body comfortably protected from extremely cold weather. However, this fur becomes very uncomfortable in tropical climates. While in his normal form, Walter requires glasses to give him 20/20 vision.

Equipment: Walter developed a bag-like suit which allowed him to be carried in-flight by Aurora or Northstar in his smaller and lighter human form without being affected adversely by the friction caused by their high speed.
Transportation: Alpha Flight Omnijet.
Weapons: None known.

Retrieved from "https://marvelcomicsfanon.fandom.com/wiki/Walter_Langkowski_(Earth-1010)?oldid=255266"
Community content is available under CC-BY-SA unless otherwise noted.