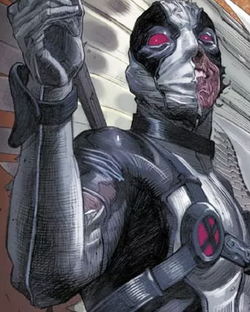 Who am I to say no to a little murder?

Wade Wilson was a member of the secretive government organization, Weapon X, which unlocked his mutant DNA and trained him into a killing machine. He often worked alongside Wolverine and Sabretooth, but did not get along with either of them.

When Weapon X was destroyed by the two of them, Deadpool avoided their wrath and eventually found his way into Apocalypse's Armada, working as his personal hitman for the missions deemed too small for the Horsemen to handle.

Deadpool and some other soldiers were later sent to raid Department H when the Armada caught wind of the reality hoppers, the Outsiders. During the battle, Deadpool finds himself fighting against Sabre, who manages to cut his head off and then use her telepathy to prevent him from healing, essentially killing him.

Retrieved from "https://marvelcomicsfanon.fandom.com/wiki/Wade_Wilson_(Earth-9999)?oldid=246162"
Community content is available under CC-BY-SA unless otherwise noted.