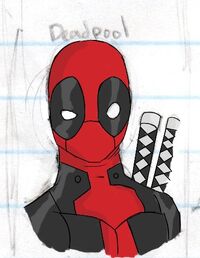 Sometime during the 1980's, A former Special Forces soldier Wade Wilson, served with the U.S. army to take down a terrorist group, led by a soviet Red Skull. He was soon dishonorably discharged. Months later, Wade was recruited by Col. William Stryker to join a top secret black ops team called The Alpha Flight sponsored by the Canadian Government after acknowledging his unique skills he had on the battefield. But before he could join, he was to participate in a experimental treatment through cybernetic enhancements that gives him powers and abilities of a super-soldier. The members of the team were Agent-Zero, Bernard Hoyster, John Wraith, Domino, Wolverine and Victor Creed. They reformed on several missions, one mission is to apprehend a hostage situation in La Citadel in Quebec City and the governor general was held prisoner in the building full of superhuman terrorists. After the team apprehended the terrorists and saved innocent lives including the Governor.

In the late 90's, Wade retired from being part of the Alpha Fight and wanted to live a normal life and fell in love with a mutant prostitute Vanessa Carlysle, with whom he shared dreams of a better life until he discovered that he was diagnosed with cancer. Wilson then broke up with his girlfriend Vanessa and contacted Stryker to see if their was a cure for him. He was offered hope when a new scientist named professor Thorton was bought into the superhuman enhancement project known as Weapon X. This scientist had ideas of how to enhance mutant agents, Mutants and humans, sometimes genetically, sometimes surgically. Wade came back only to participate in the project to cure his cancer and was one of the test subject for Thorton's experiments.

While he was being experimented on, he soon realized they were actually attempting to create an army of superpowered individuals under Stryker and Thorton's control. His cancer was temporarily arrested via the implantation of a healing factor derived from Wolverine which allowed him to heal and regenerate from any wound. The only problem, however, was that it also horrifically deformed his entire outer layer of his flesh. As a result, he was rejected from the Weapon X Program and sent to a government facility where failed superhuman operatives were treated. However, unknown to the Canadian government, the patients served as experimental subjects for Doctor Francis Fanny aka Ajax, with the patients placing bets in a "deadpool" as to how long each subject would live. Francis subjected Wilson to various torturous experiments for his own deranged satisfaction. Wade attempted to escape and made his way to Francis. Wilson impales him in the chest with a metal pole and left him there for dead. Now taking the name Deadpool, he escaped from the facility with his fellow patients.

Following his escape, Deadpool moved to Central City in the United States and started a new life as a mercenary for hire donning a costume in keeping with his new identity with his best freind Weasel serving as his weapons dealer and tech-guy for Deadpool. However, unknown to Deadpool, Francis survived, and underwent surgeries and experiments by Thorton and gained increased agility and the inability to feel pain. He then resurfaced years later and hunted down and killed many of the surviving members from the Weapon X project in order to exact his revenge on Deadpool.

Enhanced Physiology: Most of Deadpool's powers come from the experimentation's when he was submitted to by the Weapon X program. And due to the cybernetic enhancements, it gave him enhanced strength, reflexes and endurance. These powers include:

factor is significantly more powerful than Wolverines as he can even regrow an entire limb which would naturally take up a lot of energy. His head or any other limb can be reattached using this ability, but has to be placed in the proper place. Even though being beheaded, Deadpool can still move his body normally. Additionally, Deadpool can secretly use his healing factor as a tactical advantage against enemies.

Superhuman Agility: Deadpool's agility, balance, and bodily coordination are enhanced to levels that are beyond the natural physical limits of even the finest human athlete.

Superhuman Reflexes: His reflexes are similarly enhanced, superior to those of even the finest human athlete.

Superhuman Durability: Deadpool's durability is enhanced to superhuman levels. He was able to take hits from a superhumanly strong Cyborg, as well as multiple gunshots.

Superhuman Speed: Deadpool has superhuman speed thanks to Weapon X. He can easily reach speeds of 80 mph, and attack faster than the eye can follow and move fast enough to easily outmaneuver rapid gunfire.

Master Assassin: He is a master of assassination techniques, espionage methods, covert operations, infiltration methods, escape artistry, marksmanship, and is highly skilled with many bladed weapons (frequently carrying two swords strapped to his back), and a number of other weapons including firearms.

Master Marksman: Deadpool is highly skilled with firearms and projectile weaponry. He is able to precisely targets without much effort.

Master Swordsman: Deadpool's signature weapons are his dual katana blades, which combined with his agility, speed, and natural combat abilities, make them his most highly efficient weapons.

Skilled Linguist: He is fluent in Spanish, Japanese,German, and Russian.

Deadpool possesses superhuman strength derived from his augmented skeleton, allowing him to lift up to 2-3 tons.

His motor mouth, but not to an extent as his mainstream counterpart but he still has his moments.

Cloaking Device: An image distortion cloaking device that turns himself invisible to others and helps him stay hidden when certain situations demands it. The device was created by his best friend Weasel and can be found on the outside of his suit.
Transportation:

Weapons: Deadpool employs any number of high-tech weaponry depending on his current assignments. These weapons includes an plasma energy gun, concussive force guns, grenades, mini-gun, land mines, sai, knives, and katanas. Wade can use any weapon known to man and can learn how to use the weapon in less than five minutes than anyone else. Wade is mainly seen using a gun or a sharp object.

Retrieved from "https://marvelcomicsfanon.fandom.com/wiki/Wade_Wilson_(Earth-981)?oldid=259109"
Community content is available under CC-BY-SA unless otherwise noted.