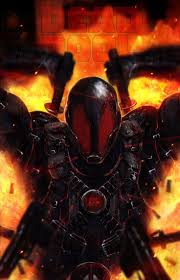 In an alternate distant future, Deadpool was still alive in 2099 been working has the worlds oldest mercenary. His mental capacities and humor remained the same. John Anthony Herod, one of the shadow rulers of America before Doom's presidency, he hired Deadpool to work for him. Deadpool was to get a basic sample of DNA from Captain America in the past . Deadpool goes to the past and steals DNA from a depowered Captain America, just in case Herod plans to use the clone against him.

Using President Doom’s resulting damaged reputation as a lever, the Megacorps struck back at Doom, as John Anthony Herod, the head of the Chicago Reserve, a secret vault full of outlawed technology, created a puppet version of Captain America and started his own attack upon the Presidency of America. Unleashed his secret weapon-- a false Captain America, capable of swaying public opinion in his favor and unleashing a brutal campaign against Doom. After Waves-spiders, genetically-engineered, living weapons, against Doom’s cabinet, sending Nkrumah back to Wakanda, forcing Sharp Blue to flee to Mexico, and killing Indigo Shun. The Wave Spiders then destroyed Doom’s Libera Cielo and traveled to Latveria where they bombed the populace using necrotoxins, which reduced all living matter to a protein-rich sludge and attacks the White House. Next, Herod destroyed the White House and rebuilt it using nanotech robots as the Red House, putting Captain America in the President’s seat as a false leader, SHIELD quickly moved side, and under Herod's control and President Rogers, was used to annihilate the super-human community, terminating The Punisher, Hulk (John Eisenhart), Metalscream, his apprentice Litany Kirkpatrick, and Galahad (Ethan Shields). NyFax and many media stations who had received images of the various heroes' execution from an unknown source, revealed to be SHIELD itself, were then shut down and their staff quickly executed by firing squads. SHIELD had purposefully sent those images to the media to see which of them were "unamerican." Herod additionally put the order to terminate all captured mutants in the inhabited areas.

Herod also attacked Doom, who abandoned Washington D.C. and saved a young mutant named Annie Wagner from Shield troopers, then retreated to the mutant haven, Halo City. Doom used the resources of the city, which he created, to again rebuild his armor. He also attacked the leader of Halo City, Morphine Somers, whom he had put in place, and threatened him to use his power properly, or he would come for him.

Wade was rich from his job for Herod and finally can walk into taco bell for tacos he so likes, then Waves-spiders, genetically-engineered, living weapons, attack him outside and on top of it he drops the tacos. "DEADPOOL SMASH!" He yells has he attacks them with his gun and katana. Also, he later learns he is now broke and  Herod had put a bounty on DeadPool 2099's head and offered mountains of gold cards to the first person to get him, Wade made a lot of enemies in this time.

When Green Goblin 2099 leads a revolt against Herod and President Rogers, who he proves is a fake. Deadpool 2099 joins the Heroes of 2099 take up the fight, along with the mutants, sell them weapons he stole from John Anthony Herod's Chicago Reserve, a secret vault full of outlawed technology. As they fight Waves-spiders and SHIELD troopers to get to the "Red House". Doom left Halo City and headed to Washington D.C. Back at the capitol, Doom used nanotech robots to take apart the Red House, along with everyone inside, including the fake Captain America, then used the same robots to eat away at Herod, sentencing him to a life of constant pain, that was until Deadpool shoot Herod in the head. Then, after putting Shakti Haddad in charge of the young mutant team, X-Nation, Doom used a hidden teleporter to travel back to Latveria to rebuild his home nation.

Without a job and a changing world Deadpool joins New Shield 2099 and starts dating Jillian Wong. He gets upgraded with new Shield tech and armor. Also, he gets to eat his tacos.

Seemingly those of Wade Wilson (Earth-616)#Personality.

Seemingly those of Wade Wilson (Earth-616)#Powers.

Seemingly those of Wade Wilson (Earth-616)#Abilities.

Equipment: Deadpool has utilized different teleportation devices to whisk him out of (and occasionally into) danger, as well as a holographic image inducer that he can use to disguise his true appearance as necessary, and a magic satchel that contains all of his unlimited weapons and ammo.

Transportation: Teleportation Device: Deadpool was able to 'bodyslide' to where ever Cable is present. At different periods Deadpool has possessed different teleportation technologies which he sometimes use for combat. Deadpool also rides Macho Gomez's spaceship after he killed him in battle.
Weapons: Deadpool employs any number of weapons depending on his current assignments. Most often, Deadpool uses guns, grenades, sai, knives, and katanas. Wade can use any weapon known to man and can learn how to use the weapon in less than five minutes than anyone else. Wade is mainly seen using a gun or a sharp object. Deadpool has also been shown as having a magic satchel, often pulling weapons out of nowhere. The satchel contains all of Deadpool's unlimited weaponry and ammo.

Retrieved from "https://marvelcomicsfanon.fandom.com/wiki/Wade_Wilson_(Earth-928.2)?oldid=197846"
Community content is available under CC-BY-SA unless otherwise noted.