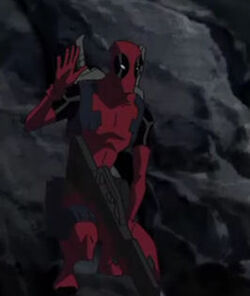 Merc with a Mouth
Identity

None of this is really happening. There's a guy on a computer, and this is all his imagination.

-- Deadpool (to the Professor)

Team X consisted of Sabretooth, Silver Fox, Kestrel, Maverick, and Mastodon. But Wade immediately befriended Logan, though the latter took longer to have the same feeling.

During Wade's time in the program, Team X was given scenarios & precedures to rewrite their memories. Though Wade's memories of his life before Weapon X left too much of an impact on Wade to forget them. Fearing that Weapon X is planning something with his team, he made sure to make everyone think said scenarios & procedures worked. The team was also given Logan's healing factor, Wade had a more sucessful procedure, gaining the ability to survive having his appendages being cut off. However the procedure also left Wade with horribly scared skin (which he kept a secret) & insane. Wade Wilson then took the name "Deadpool".

By 1972, Wolverine & Deadpool joined Department K, a secret Canadian Defense Ministry branch with ties to Weapon X. Based in Ottawa, they partnered with Neil Langram and worked with Nick Fury, now a high-ranking CIA agent, and with Richard and Mary Parker (Deadpool told them about their future deaths, but they didn't believe him). Years later, Langram was sought as an operative by the Hellfire Club, but he refused, and he was then slain by Sabretooth, hired as a mercenary. Wolverine, Deadpool, and Carol Danvers, a young US spy, investigated and confronted Sabretooth at the Club's Canadian facility. Sabretooth told Wolverine details of the Club's intent to guide a war between mutants and humans. Sabretooth then bombed the facility, but he, Wolverine, Deadpool, and Danvers survived. A troubled Wolverine turned to drugs and alcohol, and he was dismissed from Department K after accidentally shooting a fellow agent. Disgusted with himself, Wolverine planned to lose himself in the Yukon. In turn Deadpool quit Department K and followed Wolverine.

Wolverine & Deadpool were approached by Charles Xavier, who informed them that he was forming a team of mutants to protect both man & mutantkind, the X-Men. Deadpool immediately decided to join, though Wolverine rejected: an attack from Sabretooth (who had joined Magneto's Brotherhood of Mutants) convinced him otherwise. After the battle, Wolverine decided to stay with the X-Men, at the School for Gifted Youngsters, with fellow members Cyclops, Jean Grey, Storm, Iceman, Beast, Colossus, and Lightman, Sky High, and Varion Due.

Deadpool is very comedic, although this appears to be due to the fact he is apparently insane.

Deadpool possesses great, though not unnatural, physical strength. He does possesses the strength of an Olympic level weightlifter. While the exact amount of weight he can lift isn't known, he is able to lift at least 420 lbs. His true upper limit is unknown, but due to his mutant heritage, it should be somewhere around 1400 lbs, and he would only have to stop there due to his forearms breaking under the weight. To date, Deadpool has lifted up to 800 lbs.

Equipment: Deadpool has utilized different teleportation devices to whisk him out of (and occasionally into) danger and a magic satchel that contains all of his unlimited weaponry and ammo.
Transportation: Teleportation Device, Blackbird
Weapons: Deadpool employs any number of weapons depending on his current assignments. Most often, Deadpool uses guns, grenades, sai, knives, and katanas. Wade can use any weapon known to man and can learn how to use the weapon in less than five minutes than anyone else. Wade is mainly seen using a gun or a sharp object. Deadpool has also been shown as having a magic satchel, often pulling weapons out of nowhere.

Retrieved from "https://marvelcomicsfanon.fandom.com/wiki/Wade_Wilson_(Earth-727)?oldid=197845"
Community content is available under CC-BY-SA unless otherwise noted.