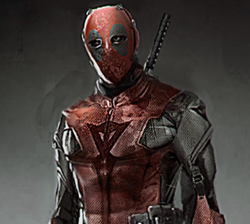 Ha ha ha, yeah yeah, I'm a Deadpool, my face is #%!&ed up, just like every other one of me. Laugh it up, while you still have a mouth that hasn't been stuffed with lead.

Deadpool comes from a reality that is not too different from the main Marvel Universe. He has been an assassin working for Weapon X since the experiment that turned him into Deadpool, and he often comes into conflict with his world's X-Men, particularly Wolverine and Psylocke.

He was recruited into the Renegades under the promise that if he returned to his world, his mutation would continue to evolve until his body was nothing but a lump of conscious cancer cells. Deadpool proceeded to go on several bloody missions alongside the Renegades.

When The Outsider pitted the Renegades and the Outsiders against each other, Deadpool killed the Outsider, Quake, and survived to the end of the battle, becoming one of the new Outsiders. However, he instantly had awful relations with his new teammates due to him having killed their friend.

After going on a few missions with the Outsiders, they came to find him insufferable and abandoned Deadpool on Earth-89702, a world where humanity has essentially been wiped out by a zombie virus. They knew his mutation would prevent him from being infected, essentially dooming him to an isolated existence among zombies.

Retrieved from "https://marvelcomicsfanon.fandom.com/wiki/Wade_Wilson_(Earth-6996)?oldid=259330"
Community content is available under CC-BY-SA unless otherwise noted.