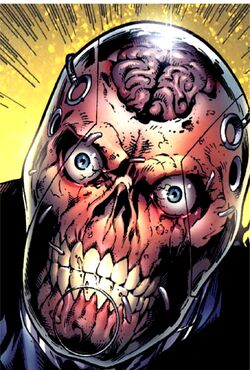 Wade Winston Wilson was a honorable and a well-respected colonel of the Canadian Army, who survived the death-defying action in the Soviet Wars in the early to mid nineties due to their secret objective of obtaining a mysterious serum, deeply buried somewhere beneath the mountains of the Eurasian borders. Their mission was miraculously successful, having to obtain a large quantity of the serum, but at the cost of losing most of his teammates, along with stepping on a landmine which had most of his face brutally torn apart due to the explosion.

After severely experiencing a extreme long-term case of PTSD, Wilson decided to momentarily retire. Due to the traumatizing experiences he reluctantly faced and the permanently untreatable scars that he painfully obtained from his last expedition, his true face had no skin and portions of his skull were missing, was entirely covered by a clear plastic helmet that made his face appear human-shaped when masked by his Image Inducer, an advance classified device used by Wilson to seemingly retain his original appearance to the public and restore his normal voice.

However, Wilson's desperate retirement didn't last for long, thanks to the considerate offer of the Canadian Government's Secret Superhuman Program led by the Major Bob Dobalina (who would later become the newly-elected president of Canada), with the sanction of the United States Government, which gave him another chance and gave and him a bright glimpse of hope, in willingly serving his country, once again. After volunteering for the secret program with regular infusions of the mysterious serum and a few more chemical solutions, he was mutated, being granted with an incredibly accelerating rate of healing factor, along with a few additions that enhanced most of his attributes and senses. In the end of the experiment, the treatment towards Wilson was gracefully successful, to which he was officially acknowledged and honored as the world's first successful enhanced human, which was also simply known as a mutate.

Losing His Own Sanity

But eventually, then came along the side effects. The side effects included Wilson losing his sanity from time to time, as it has been observably shown during his missions when he came back into the field, and having his skin apparently remains to be untreated, and would always be horribly deformed for the rest of his life. As a result of his worsening and untreatable insanity caused by the overusage of his own powers, the latter conducted a series of terrorist acts all over the country in only a matter of weeks, sadly killing a countless amount of innocent civilians and was responsible for several more casualties, throughout the cities of Waterloo, Mississauga, and Montreal. His morbidly savagery as a world-renowned terrorist and fugitive, had earned him the notorious nickname "Deadpool", among the authorities, though Wilson never seemed to have used his infamous nom de guerre, not even once, despite on the fact that he once implied on liking the name.

Since his acts of terrorism have spread across the media worldwide caused by his own delusional ideologies, he was immediately been diagnosed as insane and was eventually apprehended and securely incarcerated in a classified asylum courtesy of the Canadian Government themselves, though in some point later on, Wade was able to escape after he intentionally created a massive riot within the facility, where he broke out off his imprisonment and continued to carry on his "purification crusade," along with his main objective in tormenting and killing all those who were responsible for his transformation, and lastly, his insane personal plan in toppling down the modern Canadian government, since he implied and strongly believed that the government was not whom he thought it seemed it was, before it became heavily influenced by the culture of the United States, to which he was delusional that the American government was the true mastermind behind the Secret Superhuman Program, that ruined him his whole life.

From that point on forward, Wade had secretly started recruiting several more human gladiators all over the American continent to which he simply named the "Renegades," composing of both and defected and rejected mutates who have also undergone the same painful surgery he previously went through, to become cyborgs for the specific purpose of joining him and his cause, to neutralize those who have wronged them in the past, and those whom they believe that poses a threat to the country, and finally, bring down the modern system of the Canadian government into absolute anarchy.

During their massive attack across the city of Ottowa, the terrorists would nearly would have succeeded on their core objective, since they were close into assassinating the current Canadian president Bob Dobalina, but both he and his plans were foiled by the team-up of the heroic Canadian hero, Haywire, and his American ally and fellow Squadron Supreme member, the New Troy vigilante Nighthawk, along with a few military support coming from both the Canadian and American armed forces.

This act of the heroes had enraged the corrupted Colonel, causing him to fire his plasma energy guns in a frenzy where he even manages to critically hit and injure Nighthawk and kill a countless number of soldiers, right until the Haywire latches onto him as he swiftly entangles him with his own explosives before pushing him off the icy cliff, causing for Wilson to explode and apparently killing him, just as he falls deep into the depths of a chilly lake.

However, Wilson miraculously survived his near-death ordeal thanks to his powerful healing factor, since he usually does so, as his disfigured figure appeared on the washed up shores of Great Bear Lake as he watched the Hawk flies off into the sky, leaving the Great White North, while clutching on to his broken metallic helmet. Unfortunately, just as moments before Wilson could have left the shore, he sees a bright light, mysteriously glowing and lurking from deep below, which by all the sudden, ambushes the mutate with its enormous bio-organic tentacles, dragging Wilson straight back down into the depths of the icy lake.

Artificially Enhanced Physiology: Colonel Wade Wilson's powers and enhanced abilities came from the experimentation he was submitted to by the first generation of the Canadian Government's Secret Superhuman Program, being the first ever candidate who had participated in the program.

Retrieved from "https://marvelcomicsfanon.fandom.com/wiki/Wade_Wilson_(Earth-61712)?oldid=256340"
Community content is available under CC-BY-SA unless otherwise noted.