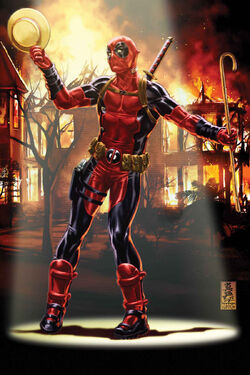 Jeez... Does this kid not have anything else to do but write his hopeless f*ckin' fanfics? Cause if he does write mine, then I definitely ain't complaining about that... Keep it up, man! Plus, I look great in that photo too, so I gotta give the artist a lotta props for makin' that one hell of a bad boy... God, I love everyone, especially me...

Wade Winston Wilson was born around the late 1970s in Regina, Saskatchewan, Canada to Thomas and Hailey Wilson. Wade had conflicting memories of his childhood, other than the fact that he was considered to be weird and strange by his friends and relatives (and not in the mutant kind of way, cause that would be racist). Serving in the Special Forces as an adult with countless unspecified kills (because comics) and was (definitely not dishonorably) discharged because of it, Wade eventually spent his new livelihood as a mercenary operating at the Sister Margaret's School for Wayward Girls in New York City, where he met, and began a romantic relationship with one of its regulars, Vanessa Carlysle (the most beautiful lady known to mankind). Unfortunately for him, when the once euphoric and contented Wade was diagnosed with late-stage cancer shortly during five-year anniversary. In an effort to find a cure at all costs in order to be with Vanessa for the rest of his life, he reluctantly took a break in seeing her and enrolled in the last living branch of the clandestine Weapon X program under the head of Ajax (ah, Francis... that f*cking piece of shite...) and Angel Dust, which gave him a healing factor from a spectacularly-regenerative mutant and set him to work for them contractually (I really own it all to Hugh Jackman's beautiful long lost twin, don't I?).

However, instead of giving him a chance to work with Weapon X as their soldier, he was only subjected into more and more experimentation, revealing that Wade himself was the last living piece of the Weapon X, explaining that Weapon X is no longer a military-based program. From that point, he went through a painful and torturous process which slowly deformed his body into a heavily scarred and mortified one, in order to prove and test the extent of his newly-gained regenerative powers and further amplify it. Wade only endured through the entire experiment completely awake thanks to his undying sense of humor, something that has vexed every single person who experimented on him. Wade attempted to escape and destroyed the facility in the process (which killed most of Wade's former teammates), but ultimately lost to Ajax in battle due to Wade's weakened state. Wade was presumed dead, in which he first dreamt of Death herself which became interested in him during his near-death state, but thanks to his abilities, he survived and was immediately determined to unleash a path of vengeance after returning to New York (which most of you must all know by now what would happen next, unless you're thinking of the movie, which is wrong, 'cause there was no X-Men in this one, or "save the girl" trope. Vanessa doesn't deserve to be anywhere within my complicated-@$$ crap).

Merc with a Mouth

Realizing that he would no longer have the chance to reunite with Vanessa or live a normal life unless he finds a way to get back at Ajax, Wade took on the mercenary moniker Deadpool after his former notorious nickname back at Sister Margaret's, and began hunting for Ajax with the help of his best friends Weasel, Blind Al, and Dopinder, in a mission to force him to fix his deteriorated condition. Ajax was still involved with illegal activities, secretly experimenting on mutate and mutant children alike, discovering that he never stopped, masquerading his schemes as a headmaster of the Essex House for the Gifted (Francis said that he was hired into working for someone "more sinister," but I couldn't give two sh*ts. I only came for him, not for some subplot.). The Merc with the Mouth, unconsciously inhibiting the spirit of a superhero in spite of his bloody methods, (as my favorite actor has famously an perfectly delivered it: "I may be super, but I'm definitely no hero.") confronted Ajax and his men within the house, where Deadpool was able to intervene his plans, save the mutant orphans (while I do save lives, there's always a price. children are exception, of course.) before burning the house down. After a tough and distressing duel to the death, Wade mercilessly kills a defeated Ajax with a shot to the head, thus fulfilling his vengeance when Ajax revealed he could no longer fix his face.

Despite not being a mutant by original genetic status, Deadpool's heroic mutant-related actions eventually piqued the interest of the terrorist group Brotherhood of Supremacy, and later on, the more egalitarian X-Men (oh could you believe that all I could ever dream of was joining Professor X's group of weaponized children? I know I am!). Later on, Deadpool was present, though publicly unnoticed, during the Chitauri Invasion's Battle of New York when a pack of Chitauri manages to make it outside the streets of Sister Margaret's School, in which the mercenary suited out of nowhere as he and fellow mercenaries took care of the extraterrestrial invaders from wreaking havoc inside the school by causing destruction outside the streets until they executed all of the Chitauri, leaving for the authorities hours later to do nothing else but clean up the mess that they've made (someone should really tell the Avengers and their street buddies that they're not the only ones kicking alien-asses that day. Me and my merc pals needed some credit too, you know).

To be added, but I assure you: this one's gonna be one hell of a ride, at least if the writer does write it.

To be added, while I try to make sense on what the hell's gonna happen here.

To be added, but I'm definitely Team Stark all the way, and I'm feeling' good about it!

Enhanced Physiology: Most of Deadpool's powers come from the experimentation's he was submitted to by the Weapon X program. Deadpool possesses superhuman healing factor derived from that of the mutant Wolverine that allows him to regenerate damaged or destroyed bodily tissue with far greater speed and efficiency than an ordinary human. Deadpool's healing factor provides him with an endless lifespan by halting the aging process.

Retrieved from "https://marvelcomicsfanon.fandom.com/wiki/Wade_Wilson_(Earth-61615)?oldid=273194"
Community content is available under CC-BY-SA unless otherwise noted.