Now I'm better at whatever it is Wolverine does!

Deadpool is a boss and subsequently a playable character in Marvel Ultimate Alliance: Doom's Reckoning.

Wade Wilson was recruited by the Weapon X Program after he developed extensive cancer. He was injected with Wolverine's DNA and developed healing abilities. After the agency was dismantled, he went off on his own, becoming the mercenary Deadpool. He eventually finds himself kidnapped by Mister Sinister and experimented on at Bar Sinister. However, when the Ultimate Alliance arrives he is freed, and in his confusion, engaged in battle with the heroes. However, after he discovered the truth, he forced himself onto their team to take down the Cabal. 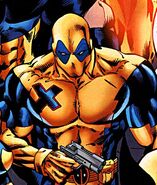 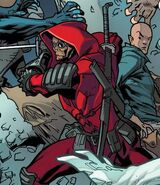 Battle of the Atom 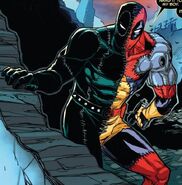 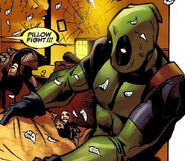 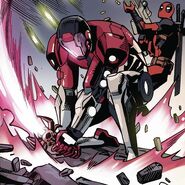 Lady Deadpool
Add a photo to this gallery
Retrieved from "https://marvelcomicsfanon.fandom.com/wiki/Wade_Wilson_(Earth-6110)?oldid=259332"
Community content is available under CC-BY-SA unless otherwise noted.