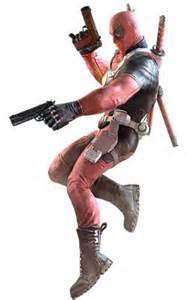 Merc with a Mouth, Sensation with the Registration
Identity

At some point Deadpool was trapped in Murderworld by Arcade, where he beat up some clowns, and then talked to Dark Spider Man about online dating, before beating him up too. The rest of his life prior to the games was presumably similar to his mainstream counterpart.

When the Masters of Evil attacked the S.H.I.E.L.D. Helicarrier, Deadpool was amongst the many heroes to come to aid in the defense of the vessel. During this event, Deadpool tried to charge S.H.I.E.L.D. agents money to get them out of their rooms Deadpool stayed with the team until the defeat of Dr. Doom at some point afterward.

Later when the White House was attacked by Mercenaries under the command of Titanium Man, Deadpool arrived, to supposedly "see the Cherry Blossom Festival", he then attacked the Ultimate Alliance for "Laughing with their eyes!" (although it is likely he is talking to the player). After his defeat, Deadpool helped the team rescue the captive senators and fight Titanium Man before agreeing to rejoin the team. After the Civil War broke out, Deadpool apparently got $20.00 for joining the Pro-Reg heroes.

After the Wrecking Crew's attack in NYC's subway system (which happened months after the Civil War), a meeting had taken place in Washington D.C. This was over the superheroes' limitations under the Superhuman Registration Act. Deadpool, Spider-Man, Wolverine, and Hulk were sent in case of supervillain attacks. Shock of shocks: the meeting was attacked by a supervillain. The attacker was someone claiming to be Blizzard. However he was then attacked himself by Taskmaster of all superhumans. One confusing battle later, "Blizzard" attempted to take the President via a teleporter implanted in his armor. However he is shot down by Taskmaster.

Taskmaster explained that the Blizzard they fought was really a Skrull. He parts off to find and kill more of them in the city. They squad of heroes are contacted by S.H.I.E.L.D., one of their platoons is being attacked. While making their way downtown, they are suddenly attacked by Mac Gargan, the new Venom. The villain wanted revenge on the U.S. government for inadvertently creating the Fold; claiming that formally infected supervillaisn have gone into seclusion, others even committing suicide. Venom is of course defeated.

The UA attempts to contact the Fantastic Four to help them against the Skrulls & to create something to identify Skrull imposters from humans. However, after 2 failed attempts to radio the Baxter Building; a squad composed of Deadpool, Spider-Man, Toxin, and Electro is sent once again for investigation. Getting inside, the team reaches the 35th floor; only to discover a captive Fantastic Four, their captors of course being the Skrulls. After besting them and a repurposed Dragon Man android, the team frees the Four and escape.

Retrieved from "https://marvelcomicsfanon.fandom.com/wiki/Wade_Wilson_(Earth-6109.2)?oldid=128471"
Community content is available under CC-BY-SA unless otherwise noted.