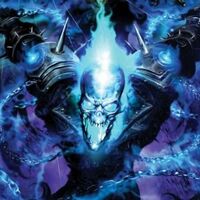 Dormammu was getting bored of ruling the Dark Dimension, so he created an artificial human body for himself and erased all memory of being Dormammu, fighting Spiderfire and The Dark Dimension. A'Lars then created fake memories for him, and Dormammu became "Wade Wilson", a caterer who suffers from extreme unpopularity.

One day, Wade was approached by Richard Parker, an infamous HYDRA scientist who asked if he'd like to be the subject of an experiment and Wade happily agreed, not knowing what HYDRA was. The experiment made him able to transform into a creature with a blue fiery skull, Wade then regained his memories and knocked Richard out. He visited A'Lars, who had now taken up the identity of Ted Sallis, and asks him to re-erase the memories, but he admitted that he couldn't and left him alone.

Wade then went to Titan along with Hercules, Thor, Thanos, Storm and the Collector in order to see Midas, they made a deal to unite the species of the universe and they soon formed the Ruler Regard.

Wade Wilson then battled the Rebellion on Intergalactico.

Retrieved from "https://marvelcomicsfanon.fandom.com/wiki/Wade_Wilson_(Earth-37U)?oldid=254002"
Community content is available under CC-BY-SA unless otherwise noted.