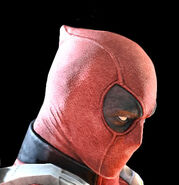 This is the version of Deadpool appearing in the movie Deadpool (film).

According to himself, Wade Wilson was born in Canada. His father left when Wade was very young. Then, his mother remarried, but was soon diagnosed with cancer. After she died, Wade's stepfather became an alcoholic and neglected and abused Wade. This led Wade to destructive behavior and, still at a young age, tried to burn his school down.

Later, Wade's stepfather became drunk and got himself shot. Wade was put in an orphanage, but ran away the first day.

Merc With a Mouth

Wade moved to America and became a mercenary for a few years and eventually met the stripper Vanessa Carlysle. They moved in together because Vanessa was a shape-shifting mutant whom the government wanted to catch. Wade was not very established as a Mercenary due to his lack of superpowers (and his big mouth).

Wade was diagnosed with cancer, and was chosen as the subject for Dr. Emrys Killebrew's Canadian government Weapon X project, and he accepted because he has nothing to lose.

He was given an extreme healing factor at the Weapon X facility called Hospice, and was put on a special black ops team with fellow Weapon X agents Kane, Sluggo, and Slayback. But, their first mission was disastrous and ended with them all seemingly dieing at the hands of the mysterious T-Ray.

But, Wade survives, and is put back in The Hospice, but in a facility called The Workshop, where Dr. Killebrew experiments on unwilling Weapon X failures such as Wade and a fellow prisoner called Worm. The experiments put Wade's healing factor to the test, and leave him horribly scarred, but still with the healing factor. After Worm is tortured by Killebrew's enforcer Ajax, Wade is forced to mercy kill him. After realizing that T-Ray is working for Killebrew, Wade escapes and returns to America.

After Wade returns to America, he finds that his old apartment is now lived in by a 20-something year old called Weasel. They become roommates and Weasel introduces Wade to the mercenary bar the Hellhouse and it's owner Patch, a former mercenary who has experience with Weapon X.

Then, Weasel makes Wade a red and black costume and he returns to being a mercenary, under the name Deadpool.

As Deadpool, he discovers that the former members of his Weapon X team are alive and still working for Killebrew. He travels the world, killing them one-by-one, and even apparently kills Ajax. Deadpool is also reunited with Vanessa, who also becomes a mercenary, and meets new allies in the form of 'Hydra' Bob and Blind Al.

T-Ray teleports Deadpool and Vanessa to the Weapon X facility to kill them (using a teleportation device Dr.Killebrew invented). There, T-Ray kills Vanessa, which makes Deadpool less humorous and more angry. After a long battle, Deadpool apparently kills T-Ray and steals his teleportation device. After the insane Inez Temple destroys the entire Weapon X facility, Deadpool teleports himself and Vanessa's body back to his apartment.

Only time will tell what the future holds for the Merc With a Mouth.

As a result of the Weapon X procedure, Deadpool has an extreme healing factor that allows him to heal from any wound. The limits of the healing factor have not been tested. The only thing that can negate his healing factor is T-Ray's Adamantium sword, which has been enhanced by the mysterious 'Dark Masters'.

Deadpool's mask and costume is made of bulletproof Kevlar, although he doesn't need it because of his healing factor. It is made of Kevlar because if a bullet does penetrate it, than the costume will not be ripped enough to be destroyed, making it look like the costume regenerates along with Deadpool.

Deadpool is now in possession of an advanced personal teleportation device, invented by Dr.Killebrew, which he stole from T-Ray.

Deadpool's primary weapons are a pair of Adamantium katanas. He also has a pair of pistols and a couple of grenades "for good measure". He also has heavier weapons and sniper rifles which he uses on special missions. Because of Deadpool's large supply of weapons, it is rumored in the Underworld that Deadpool has a 'magic satchel' which any weapon can come out of, although this is not true.

This version of Deadpool appears in Deadpool (film).

Retrieved from "https://marvelcomicsfanon.fandom.com/wiki/Wade_Wilson_(Earth-199998.10006)?oldid=259913"
Community content is available under CC-BY-SA unless otherwise noted.