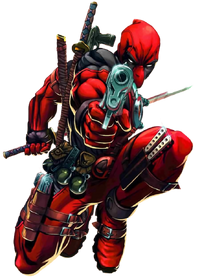 Wade's history matches that of his his cinematic counterpart through the credits of his first movie.

Soon, Deadpool would be in The Great War. Instead of taking a bad guys side or good guys side, he went with the Outcasts.

Genetically Enhanced Physiology: Deadpool's powers come from the experimentation he was submitted to by an unknown organization.

Retrieved from "https://marvelcomicsfanon.fandom.com/wiki/Wade_Wilson_(Earth-1210)?oldid=150146"
Community content is available under CC-BY-SA unless otherwise noted.