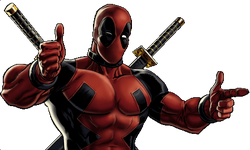 Wade Wilson was a soldier and mercenary with enhanced far beyond human reflexes and agility due to him being a mutant. During the Vietnam War, Wade was a member a Black Ops group called Team X under the command of William Stryker. The team also included James "Logan" Howlett, Victor Creed, Christopher Bradley, Agent Zero, John Wraith, and Fred Dukes.

When Wilson refused to complete his assignment, allegedly the first time he had ever done so, he was relocated to the United States. In America, Wade met and fell in love with mutant teenage prostitute Vanessa Carlysle, with whom he shared dreams of a better life. Learning that he had contracted cancer, Wilson broke up with his girlfriend Vanessa rather than force her to remain with a terminally ill man. He even gave up his chemo treatments, not wishing to prolong things.

Back in Canada, he was offered hope in the form of Department K, a special weapons development branch of the Canadian government. Wilson became a test subject in Department K’s branch of the joint U.S./Canadian superhuman enhancement project, the Weapon X Program led by Stryker himself; his cancer was temporarily arrested via the implantation of a healing factor derived from another Department K agent, the mutant adventurer and former teammate Wolverine. He was given the name Deadpool.

After a battle against Logan and Creed (hired by Stryker to get mutants' DNA to experiment with) atop a cooling tower at Stryker's plant, Weapon XI was beheaded and seemingly defeated by Logan. However, he survived decapitation and Wilson formed a romantic relationship with the cosmic entity Death, who regarded him as a kindred spirit.

Enhanced Physiology: Most of Deadpool's powers come from the experimentation's he was submitted to by the Weapon X program.

Possession Resistance: Similar to the telepathic immunity, Deadpool is able to remain in partial control of himself while supernatural beings are trying to take control of him.

Superhuman Strength: Deadpool is rated as having a superhuman level of strength capable of lifting 2 tons on the Marvel Strength Scale.

Superhuman Stamina: Deadpool's musculature generates considerably less fatigue toxins than the muscles of an ordinary human being, granting him superhuman levels of stamina in all physical activities. He can physically exert himself at peak capacity for several days before boredom or stress takes over, and could have possibly gone on further.

Superhuman Agility: Deadpool's agility, balance, and bodily coordination are enhanced to levels that are beyond the natural physical limits of even the finest human athlete.

Superhuman Reflexes: His reflexes are similarly enhanced, superior to those of even the finest human athlete.

Superhuman Speed: Deadpool has superhuman speed thanks to Weapon X, but he sometimes relies on his teleportation device.

Deadpool possesses great, though not unnatural, physical strength. He does possesses the strength of an Olympic level weightlifter. While the exact amount of weight he can lift isn't known, he is able to lift at least 420 lbs. His true upper limit is unknown, but due to his mutant heritage, it should be somewhere around 1400 lbs, and he would only have to stop there due to his forearms breaking under the weight. To date, Deadpool has lifted up to 800 lbs.

Retrieved from "https://marvelcomicsfanon.fandom.com/wiki/Wade_Wilson_(Earth-1010)?oldid=175974"
Community content is available under CC-BY-SA unless otherwise noted.