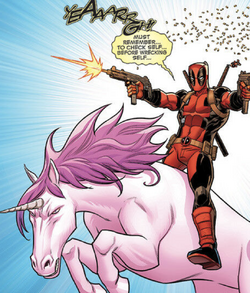 Slade Wilson, The Merc with a Mouth
Identity

I can't wait to see how this shit show plays out.

Wade Wilson was diagnosed with cancer after compiling an impressive history with the military. Becoming resigned to his death, he was hesitant when he was approached by a man named William Stryker, who offered him a chance to save his life.

He accepted the offer and was taken to Alkali Lake, the home of Weapon X. It was there that they discovered Wade's latent mutant DNA, and he was injected with a sample of genetics acquired from Wolverine. This activated his powers, but also rapidly enhanced his cancer, which spread all across his body. However, his healing factor kept it constantly at bay, unable to kill him, but unable to heal it away.

However, the mutation also unlocked Wade's mind. He had always been a bit of a nutcase before, but now he was capable of seeing things for how they truly were. This is why he didn't care when he and the other Weapon X operatives were sent on dozens of kill missions, he simply believed that none of it mattered.

However, he eventually became tired of the forced organization within the Weapon X Program, and left. He decided to go back to his wife, only to discover she had committed suicide not long after he disappeared. Actually finding himself with conflicted feelings, Deadpool wasn't sure where to move on from there.

He set up shop in a New York apartment, deciding to sell his talents to whoever needed them. He was eventually hired to assassinate Wolverine, which he only accepted as an excuse to catch up with his old buddy. Wolverine, on the other hand, was more than annoyed to cross paths with Deadpool again, especially when he started trying to convince the X-Men that he'd make a great member of their team.

Deadpool would eventually form a special relationship with Hela, the Goddess of Death, who was enamored by Wade's inability to die, as well as his affliction for murder. While she was dedicated to Thanos and their mission with the Black Order, she and Deadpool often found themselves having a little fun on the side. This led to Thanos and Deadpool forming a very hostile relationship with each other. Thanos would constantly try to kill Deadpool, while Deadpool would simply make fun of his chin.

Retrieved from "https://marvelcomicsfanon.fandom.com/wiki/Wade_Wilson_(Earth-101)?oldid=250249"
Community content is available under CC-BY-SA unless otherwise noted.