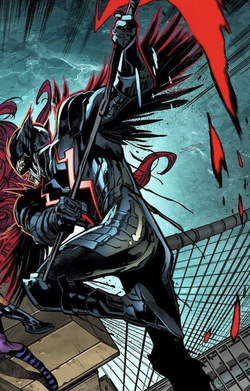 The Grim Reaper of the Inhuman Race
Identity

We are an abomination. Each and every one of us deserves to die, horribly. Slowly.

The oldest son in the Boltagon Royal Family of Attilan, Vox decided to wait until he reached maturity to undergo Terrigenesis. However, after he did, he discovered that his skin had become shriveled until basically a skeleton. He became ashamed of himself, and came to blame the Inhuman way of life for considering something like that "normal".

He abandoned Attilan and began to travel the cosmos as a nomad, often finding himself being forced to kill in order to survive. He grew bitter with the very concept of existence, and thought back to his lessons in Inhuman history. He then sought out the Kree Empire on Hala.

He was forced to prove himself worthy of not being executed. He considered giving in to just let them kill him, but decided his mission was more important. After being granted lenience, he convened with the Supreme Intelligence, and together they concocted a plan to exterminate all Inhumans in existence.

This eventually led to the Inhuman Royal Guard making their way to Hala, led by Vox's brother, Black Bolt himself. It was then that Vox made himself known, and engaged in battle with his brother. In the end, Vox was able to impale him with his scythe, only to be immediately murdered in return by his brother, who used his shattering scream to destroy the entire planet.

Retrieved from "https://marvelcomicsfanon.fandom.com/wiki/Vox_Boltagon_(Earth-101)?oldid=250248"
Community content is available under CC-BY-SA unless otherwise noted.