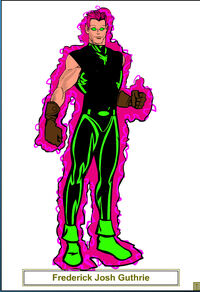 Frederick is the child of both Cannonball and Blink.

He possesses the normal human strength of a man of his age, height, and build who engages in moderate regular exercise.

Retrieved from "https://marvelcomicsfanon.fandom.com/wiki/Vortex_(Earth-1992)?oldid=41070"
Community content is available under CC-BY-SA unless otherwise noted.