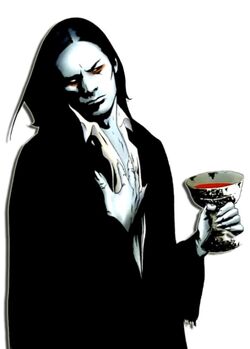 In my never-ending thirst for blood, I still dream of teeth and power...

Vlad Tepes Dracula is the supreme ruler the world's most powerful, one of the youngest known, and is also one of the first of vampires since the 15th century, the first known age of vampirism. Driven by lusts for power, companionship, and blood, his centuries of undead existence have brought him into conflict with vampire hunters, other immortals, and most recently, an organization of time-travelling heroic guardians throughout different parts of mankind's history. Dracula has a vast network of loyal servants, cultists, brides, and minions, who assist him and would do whatever it takes just to attempt resurrecting him if he would get slain by his hateful adversaries, something that Vlad usually despises on happening, even on his reckless youth as the prince of Transylvania and Wallachia, and the Lord of Vampires.

Homines Nocturnae Physiology: Dracula, like all other vampires, is capable of transforming an individual into a vampire by biting them. A special enzyme found only within vampire saliva is responsible for this transformation. After draining all of the blood from a victim, the victim enters a death-like state and returns to life three days later.

Retrieved from "https://marvelcomicsfanon.fandom.com/wiki/Vlad_Dracula_(Earth-61656)?oldid=267982"
Community content is available under CC-BY-SA unless otherwise noted.