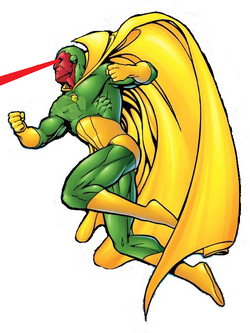 Divorced
Occupation
Adventurer
Origin
Origin
Once only the Avengers' robot wraith, he joined Captain America's Avengers for equality of all species.
Creators

Vision's history is exactly the same as that of Earth-616's Vision up until the Marvel NEW! relaunch.

When Captain America began forming a new Avengers team for mutant-equality, he convinced Iron Man to recreate the Vision. He invited him to become a member of this team. Vision accepted, due to his marriage with Wanda, and his hope to save the world.

Robotic Physiology: Vision's powers are similar to his 616 counterpart, but some powers have disappeared after his rebuild, and many more have appeared. Due to his new merge of original Vision and Stark technology, his current power set includes:

Retrieved from "https://marvelcomicsfanon.fandom.com/wiki/Vision_(Marvel_NEW!)?oldid=84248"
Community content is available under CC-BY-SA unless otherwise noted.