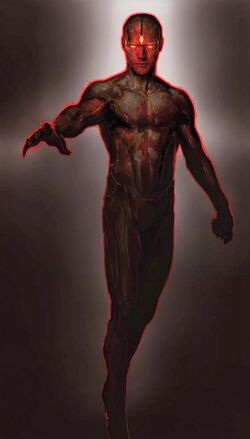 Earth-61616
Base Of Operations
Ultron's Sanctuary, The Alps
Characteristics
Gender

Wanda, you have left me no choice... Either you submit now to the technological master himself and consider yourself salvaged & reborn... Or perish, and rot along with the rest of all life on this barren planet destined to be eradicated, and remolded in his own image...

Before the years of Ultron Revolution, Vision seemed to have the same history with his Earth-61615 counterpart, along with some few additions throughout his life during the modern day including where he started double living as a normal civilian by the name of Victor Shade, living a quiet life with his teammate and lover Scarlet Witch across the United States and sometimes even across Europe, only a few years before his "father," the delusional and megalomaniacal machine Ultron had started an all-out war against humanity, along with the intent of exterminating all life on Earth, and extinguish those who dares to oppose him and his ideologies.

At some point during the of days of the Ultron Revolution's Year 7, Vision was one of the many unfortunate heroes who have gone missing a few months not long after the death of Hank Pym, who was also mercilessly executed by the cold-blooded hands of his own creation. More saddening enough, Vision's whereabouts wouldn't have been revealed to anyone else within the heroic Resistance for the next several years, not even right after the end of Ultron's decade-long reign over the entire world.

According to everyone else who knew him, Vision's status remained an intriguing reoccurring mystery, right until the Vision's former lover herself, Wanda Maximoff has decided to leave the Resistance due to reasons unrevealed, other than the fact that she alone had left the team during the fall of Year 8, and had meticulously gone in hiding from the roaming Ultron Sentries in search for Vision. During the Scarlet Witch's month-long search, she came all her way from Manhattan just to make her way onto Ultron's notorious and convincingly inescapable sanctuary, in hopes of finding her beloved there. After arriving at Ultron's domain-like lair, Wanda sneakily searches the entire complex undetected, as she easily uses her connection with Vision, since her powers are solely related with Vision's Mind Stone, after all.

After trying to search the missing android within the Sanctuary's countless complexes, Wanda was able to locate the Mind Stone at a secret factory below the Sanctuary, but unfortunately, the Stone itself was not in the Vision's forehead, and in fact, the Vision was nowhere to be found. Extremely confused by what she had found, it took Wanda long enough to realize that she has miserably find herself in a trap, which was set up by none other that Ultron himself, or so she thought. Arriving from the shadows, came the arrival of the Vision himself, who revealed himself to Wanda that he was forcibly reprogrammed to be under his creator's coercion, now that the Mind Stone is finally out of his possession.

The android revealed to Wanda that Ultron was using him as a conduit, with the intent of potentially using him in punishing humankind from their timeline, and into the past, when Ultron would finally be successful in creating the prototype of his chronoskimming device in his own design, a tool that would help Vision in sending his digital consciousness into the past in order to make sure his mission would be accomplished. Hearing this unexpected revelation, Wanda was devastated and distressed in shock, and was forced to choose between saving her beloved by saving him from the clutches of Ultron's possession, or saving the fate of the entire human race and all other life on Earth. Lost and hopeless on what to do, a heartbroken Wanda who was still in denial, was then approached by the Ultron himself, or at least a Sentry of him whom he was remotely controlling, who only came to taunt the former into giving up hope, along with the consideration of letting her join his side.

After a moment of clarity and self-introspection, Wanda had painfully but obligatorily made her choice to save the past and the future of the entirety of life on Earth, ignoring Ultron's taunts on her, along with his failed attempt to trick her into choosing the first choice of giving up humanity in his hands, only so she and the Vision could have been finally together. As a response to her final decision, a disappointed Ultron unhesitatingly fires his concussive blasts at Wanda, in which the latter immediately defended herself while she attempts to run towards the factory and destroy the ongoing construction of the chronoskimming device, only for the machine to be instantly defended by the reprogrammed Vision, much to her dreaded and enraged emotion, having already accepted the fact that Ultron has completely erased the man she once loved, and replaced him with something else, a heartless killing machine.

End of His Misery

In the end of their brutal and emotional duel, Wanda tearfully tears her own beloved apart using her own powerful psionic energy, reluctantly shattering the android into countless pieces and shutting him down for good, not only because he was considered to be one of the, if not, the most dangerous potential threats that would lead towards the ultimate extinction of all life on the planet, or even the entire timeline of their reality itself, if the chronoskimming device was already completely functioning around the time of her arrival, but also because she knew that if she'd done this, she would have finally ended her beloved's tormenting misery, something that he couldn't possibly endure for the past few years of his unwilling subservience to Ultron.

Following the Vision's destruction and death at hands of the Scarlet Witch, his former lover took a brief moment to mourn his death, before proceeding towards the inner of the complex, where the factory of the device was located. In the end of her final mission, Wanda was able to destroy the threatening device using all of her might and power, along with the unfortunate cost of losing her own life at the same time after the its destruction had consequently caused a massive explosion within the entire complex, destroying a quarter of Ultron's Sanctuary in the process.

Morever, this had also proven that both Vision and Scarlet Witch's sacrifices have not completely gone down in vain. neither both of their legacies and memories, since Wanda was able to triumphantly foil Ultron's ultimate schemes on manipulating the timeline, but instead has led more rather towards the victory of the Resistance, to which they were able to prove that life has and will always be, the true victor, two years later during the end of the Ultron Revolution.

Seemingly those of Vision of Earth-61615, with the exception of losing the Mind Stone earlier than his prime counterpart.

Seemingly those of Vision of Earth-61615.

Seemingly those of Vision of Earth-61615.

Retrieved from "https://marvelcomicsfanon.fandom.com/wiki/Vision_(Earth-61616)?oldid=267200"
Community content is available under CC-BY-SA unless otherwise noted.