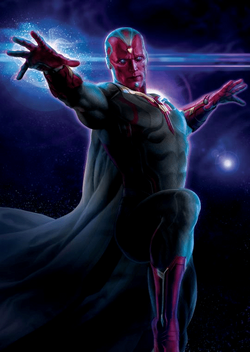 Dating
Occupation
Adventurer; former vigilante
Origin
Origin
Sentient synthezoid built by Ultron and Helen Cho using parts of a duplicate of an advanced android body along with Vibranium as an upgrade for his body. Modified Horton Cells allow him to alter his density. The brain patterns of Vision were based on his "grandfather," Hank Pym.
First appearance
Modern Comics: Avengers Vol 1 37

Vision is a powerful, synthetic being born from a Vibranium-laced, Horton Cell-infused body created by Ultron and scientist Helen Cho whom the former has coerced into making, and as later programmed by Hank Pym and Tony Stark using the based codes of Tony's assistant A.I., J.A.R.V.I.S. and Hank's brain patterns, and his very "mind" and "soul" was activated by the Mind Stone that was hidden inside the Scepter. Originally conceived as the perfect form for Ultron, practically making the former his progeny and "father", Vision was conveniently repurposed into evolving into the one of the best beings on Earth when Hank and Tony implanted the remnants of J.A.R.V.I.S.' codes and Hank Pym's brain patterns into his mind, granting him a benevolent personality and a fondness for humanity. This led him to joining the Avengers to stop Ultron in his assault beyond New York by removing the traces of his father from the internet, along with destroying most of his minion Ultron sentries until there was nothing left for Ultron to rely on but face his impending defeat. After the first Ultron Offensive, the newly-born sentient and altruistic Vision became an official member of the team, helping them join forces against evil across the nation and rest of the world.

Living in the Avengers Tower within his headquarters, the Vision mostly spent his free time travelling across the city in his civilian identity of Victor Shade, which worried Pym and Stark at first fearing that his exposure might render him to become the next Ultron, though his teammates were immediately relieved after their teammate Scarlet Witch decided to keep an eye on the continuously-learning android, revealing that the energy source that gave her powers were strikingly similar with Vision's, making Wanda conclude that she and the sentient android are somewhat psychically and "spiritually" connected due to having the same power source. Wanda's curiosity and frisky-like friendliness eventually caught Vision himself, notably after the moment she began calling him the nicknames "Vis" or "Viz," thereby forming a close friendship between the two, which grew fruitful the following years as they fought side by side as Avengers, or even as temporary enemies after dealing with the diabolical and tragic Movement. Wanda's twin brother Quicksilver grew to respect and eventually befriend Vision himself, seeing him as a great friend of his sister's after finding out their flowering relationship.

Wanda was there to make Vision feel more and more human as time passes, and so was Vision in comforting and advising her whenever she needed his back, mostly since Wanda became lonelier and isolated understanding her powers instead of socializing with her peers. Despite realizing that she was mostly using him to be her crying shoulder (most notably the time her former lover Spider-Man after the latter had broken up with her), Vision's emerging feelings for her, which he initially thought was a new glitch within his programming, never diminished and had only grew from time to time, just as a man would feel for another woman. Unfortunate for the one-sidedly infatuated Vision, Wanda was dazed and confused when she first felt and discovered her close friend's lingering affection, since she was in denial of the reality, deeming it impossible until realizing herself that her situation was just the same as well to most people. After the fall out and fragmentation of the Avengers during Civil War were resolved during the Secret Invasion, Vision patiently waited for Wanda's return ever since she fled with Captain America's Secret Avengers. Just as the alliance heroes and villains have achieved victory by stopping an alien invasion on their planet, Vision and Wanda completely reconciled and rekindled, and together the two started living off the grid as they travel across the globe, finally upgrading their once friendlier and more complicated relationship into a more romantic, and simpler one.

However, during the two and a half year of Vision's momentary retirement with Scarlet Witch, the couple was unexpectedly ambushed by the extraterrestrial Black Order during their stay in Eastern Europe, who were attempting to steal the Mind Stone from his forehead under the orders from the Mad Titan Thanos in his cosmic quest to assemble Infinity Stones with his invincible gauntlet. Having been rescued by his allies in the form of the Avengers, the heavily-injured Vision agreed to have the Mind Stone removed from his head, as they traveled into Wakanda to recruit the help of T'Challa, Shuri, and Wakandan technology itself. Their attempts were unsuccessful, as the Black Order attacked Wakanda, Vision was strategically driven by his into vulnerability and as Thanos arrived by the finale, Vision had convinced the devastated Scarlet Witch to destroy the Mind Stone, killing him, only for Thanos to use the Time Stone to then resurrect Vision and rip the stone from his head, killing him for a second time as Thanos claimed his victory, snapping the stones-filled gauntlet to dust away half of life throughout the universe out of existence in what would historically be dubbed across the universe as the Decimation. After Thanos had teleported out of Wakanda into his Sanctuary, Maximoff mournfully sat next to Vision's lifeless body and held it until she too disintegrated into dust.

As nine months have passed, however, Thanos' snap was gratefully and courageously undone by the cosmic Adam Warlock and the surviving joint forces of heroes mostly on Earth as they subsequently defeated the lone Mad Titan in his realm the Sanctuary, resurrecting Scarlet Witch and half of all life in the universe back to life. After the resurrection of his fallen allies, Vision was rebuilt and upgraded by Pym with the assistance of Wanda by using some of her power source, replacing the Mind Stone that was no longer on his forehead with a newer and still technologically-advanced and mystically-amplified Solar Gem, which attributes and properties share almost the same as the Infinity Stone. Upon waking and opening his eyes once again, the android felt emotions once more as he remembers everything from his birth to death, causing him to tear up for the first time in his life, especially after seeing that his lover Wanda react the same after seeing him back from the dead. The two passionately embraced and couldn't help but kiss, and their teammates couldn't be any prouder from witnessing their heartwarming reunion, and Vision was welcomed back to the Avengers in a new, larger facility, seeking the next adventures that awaits the Earth's Mightiest Heroes now that they're back together, stronger than ever.

Artificial Intelligence, Android Physiology: The Vision's brain functions like a computer brain, in fact its mind is proven to be far superior than any form of computer or supercomputer that exists in the Milky Way, enabling him to wireless or directly interact with other computer systems to utilize or extract data from them which can be stored in his data banks. The Horton Cells substance mimics all the functions of human tissue, but is several times as strong, durable and resilient.

Retrieved from "https://marvelcomicsfanon.fandom.com/wiki/Vision_(Earth-61615)?oldid=267201"
Community content is available under CC-BY-SA unless otherwise noted.