Marvel Fanon
Register
Don't have an account?
Sign In
Advertisement
in: Characters, Templated Articles, No Dual Identity,
and 29 more 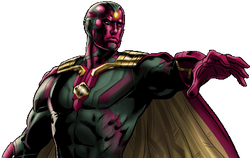 First appearance
Vision of the Future

Ultron stole Tony Stark's J.A.R.V.I.S. files and he decided to create his own android using these files and endowing its neural processors with the brain patterns of the ionically charged costumed champion called Wonder Man implanting a control crystal to keep him in check.

Vision was sent by Ultron to kidnap the Wasp. Thor, Hulk, Red Hulk and Wonder Man flew to the desert to fight the android, who easily defeated them.

After being moved by Gamora and rebuilt by Stark and Richards, the Vision betrayed his programming and helped the mighty mortals defeat his calculating creator. The Vision served the Avengers faithfully for a number of years, standing with his teammates against the foes no single hero could defeat. Tentatively at first, the almost-human android embarked on a romantic relationship with the hex-casting heroine called the Scarlet Witch that blossomed into true love and eventually marriage.

Wanda eventually drew on magic energy to give birth to twin sons, Tommy & Billy, but this energy was eventually revealed to be unstable and the children died soon.

Vision created the Young Avengers program to find the reincarnation of their two sons, who eventually turned out to be Wiccan and Speed.

According to Tony Stark, Vision's personality is Ultron's, only without the megalomaniacal aspects. Vision is a polite, calm, and thoughtful being, in a similar manner to J.A.R.V.I.S., shown when he apologises to the Avengers. Unlike Ultron, he values life and Humans. He is also shown to be blunt, when Vision told Stark that Ultron hates him the most. He also likes to reason with his enemies, and will only attack when threatened.

The Vision possesses a number of superhuman powers ultimately derived from his artificial substance and metabolism. The Vision's android body is functioning replica of a human body containing analogues to virtually all human organs, blood, and tissue, composed of an unrevealed synthetic organic-like substance. This substance mimics all the functions of human tissue, but is several times as strong, durable and resilient.