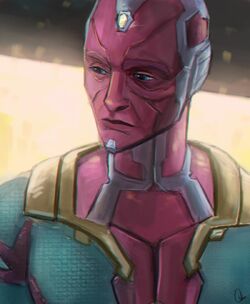 When Ultron came into possession of the Mind Stone, he began to build a new body for himself using Vibranium stolen from Wakanda. However, before the body could be completed, it was stolen by the Avengers, who implanted Iron Man's artificial intelligence, J.A.R.V.I.S., into the body.

After it was brought to life by Thor, the Mind Stone integrated J.A.R.V.I.S.'s mainframe and gave birth to a completely new being, that earned the name "Vision". Unsure of his purpose for existing, the Vision was taken in by the Avengers and taught what it meant to be a hero.

He then fought alongside them for several years while trying to prevent the Prophecy of Infinity from coming true. Despite Vision's possession of the Mind Stone preventing Jean Grey from becoming the Phoenix, he was still attacked by Thanos and the Black Order. The Avengers took him to Wakanda so that Shuri could remove the Mind Stone, but the process was interrupted by the arrival of the Black Order. After a lengthy battle, Thanos was able to come face to face with the Vision, and rip the Mind Stone straight from his head.

Retrieved from "https://marvelcomicsfanon.fandom.com/wiki/Vision_(Earth-101)?oldid=253030"
Community content is available under CC-BY-SA unless otherwise noted.