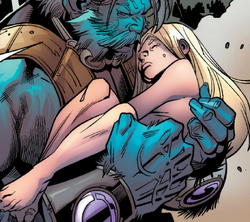 Blonde, Brown (in spider-form)
Distinguishing Features
When shapeshifted into spider-form, is covered in brown fur, has eight legs and eight human eyes and has a conventionally arachnine body
Status
Citizenship

She's a mutant. She belongs with us.

The Jackal had previously created many clones of Gwen Stacy, some with powers and some without. Upon finding out that one of his samples of Spider-Man's DNA was stolen, Jackal went after the culprit. He soon discovered that the vial was stolen by Mr. Sinister (used for the creation of Lethal), and as petty revenge stole a vial of DNA from Sinister's labs for his own uses. That vial of DNA belonged to Scott Summers, and he merged it with another sample of Spider-Man's DNA, as well as that of Gwen Stacy's, to create the being who would become known as Virginia Dare.

Under unknown circumstances, the clone escaped and began uncontrollably rampaging through New York City, due to a lack of control over her powers. She was engaged in combat by the Spider Slayer taskforce, before she began to overwhelm them due to her enormous size. Soon the X-Men and the Superior Spider-Man arrived to take her down. Despite poor cooperation between the two parties, ultimately, they were able to team together and take down the clone without injury. Due to some quick DNA tests by Beast, it was determined that she was part spider, part human, and part mutant. As such, Spider-Man allowed the X-Men to take the clone into their care, while he dove deeper into the arising clone conspiracy produced by her presence.

Inducted Into the Alphas

Upon arriving at the Xavier Institute, the clone had frequent telepathic lessons with Rachel Summers to rapidly bring up her intellect, since her mind had been completely empty when she was found. After learning about basic world history and the kind of world she was a part of, she chose the name Virginia Dare for herself. After she was deemed ready to join a squad, she didn't know who to join, because even among the mutants, she was an outcast. This made her a prime candidate for Northstar's squad, the Alphas, and after he reached out to her, she accepted in desperation. Even on a squad of misfits, Virginia still didn't feel like she fit in, despite her connection with Dust over not being an average student, culturally speaking. She spent a lot of time training in the Danger Room, logged under the alias Spider, and she began leaving the Xavier Institute during the evenings, returning before morning before anyone noticed she was missing.

Eventually, her in and out activities were noticed by a student, who alerted Northstar with what he had seen: Virginia on her way back to the Institute one morning with a large backpack. The administrators investigated into Virginia's activities, but because there were no signs that she was doing anything threatening, her mind was not read and she was instructed not to do it again. She did not listen, however, and one night after she left, a squad of X-Men consisting of Northstar, Beast, Nightcrawler, Iceman, and Rogue was sent to retrieve her. They discovered that she had been gathering intel under the alias of Abby Levine, hunting down all of her fellow clones and murdering them. Despite the X-Men's best efforts, she could not be reasoned with. Northstar reluctantly told her that she was expelled from his squad and from the school. She then engaged them in combat one-on-one (as they mostly fought off the rabid, mindless mutant clones). She tried to explain that what she was doing was correcting a mistake, that clones were not meant to exist, particularly these ones, who would never have a life of their own. But the X-Men insisted they could be saved, and in her anguish, her optic blasts went haywire, and she caused a massive explosion that destroyed the building they were in. The X-Men were barely able to escape alive, and Abby/Virginia chose not to escape, letting the burning rubble of the lab kill the remainder of the clones, along with herself.

Mutant-Arachnine Clone Physiology: As a clone created by Warren Moon from the DNA of Peter Parker and Scott Summers, Virginia had many superhuman abilities.

Spider-Powers: It is reasonable to assume that Virginia possessed other powers that Spider-Man shares, such as enhanced agility and a danger sense, although she never displayed such capacities.

Stealth: As the Spider, Virginia was an exceptionally stealthy individual, able to sneak up on creatures with enhanced awareness and dispatch them easily. This indicates a level of combat training and weapons experience, the source of which is unknown, though she claims to have been self-taught.

Cloned Physiology: As an artificially created being, Virginia was subjected to the same cellular degeneration common in other clones.
Personal Philosophy: Virginia's philosophy about clones being soulless husks that shouldn't exist proved to be her undoing, as she chose to die rather than save herself from a preventable demise.

When she first appeared, Virginia did not have a personality, because her mind was completely blank from being created, so she was controlled by fear when her first experience was that of being fought by a team of costumed individuals. As she learned more and more, she gradually became less fearful, but was still a very mild-mannered person, having difficulty making friends due to her origins and spending time mostly quiet and alone. It was when she learned what she truly was that her personality underwent a radical shift. In her desire to exterminate all her fellow clones, she became secretive, bold, and intensely focused on her mission. Her life ended as the exact opposite of who she was when she was born: bold, determined, intelligent, and calculating, the exact traits that made her a martyr for her cause.

Virginia Dare is the Earth-166 counterpart of several characters, all tied to Gwen Stacy.

Retrieved from "https://marvelcomicsfanon.fandom.com/wiki/Virginia_Dare_(Earth-166)?oldid=259310"
Community content is available under CC-BY-SA unless otherwise noted.