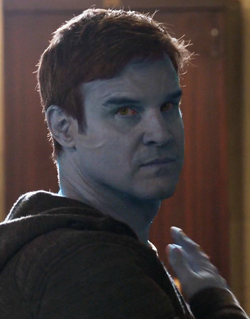 Vin-Tak was a Kree who came to Earth after he received a signal indicating that a Diviner had been activated. He came armed with a truncheon that could take away the memories of anyone who was jabbed with it, and used nitrogen to dye his naturally blue skin the color of a Caucasian human's. The Asgardians sent the warrior Lady Sif to Earth after him, as they did not trust the Kree. She tracked Vin-Tak to Portugal, but he managed to erase her memories during a fight. Vin-Tak escaped to a nearby hospital, where he used their stores of liquid nitrogen to dye his skin again. However, Vin-Tak's actions also attracted the attention of S.H.I.E.L.D.. Two S.H.I.E.L.D. agents, Bobbi Morse and Skye found Vin-Tak at the hospital and and challenged him. While they were fighting, a small earthquake broke out, giving Vin-Tak an opportunity to escape. He made his way to the city of Chaves, where he found a crate containing Terrigen Crystals, but S.H.I.E.L.D. managed to track him there and corner him while he was leaving. Vin-Tak put up a fight, but one of the agents fired an electrified net towards him that knocked him out.

S.H.I.E.L.D. took him into custody and started questioning him aboard their plane. Vin-Tak tried to explain his purpose on Earth, and said he only wanted to help. When they got back to S.H.I.E.L.D.'s headquarters, Vin-Tak used his truncheon to return Sif's memories. He explained why he was on Earth, as well as his people's history on Earth and Terrigenesis. While he was explaining this to them, one of S.H.I.E.L.D.'s scientists, Jemma Simmons, discovered the crate Vin-Tak found was empty. Realizing his worst fears has come true, he urged S.H.I.E.L.D. to help him find the remaining Terrigen crystals, and anyone who had been transformed by them. He soon discovered Skye was one of the people who had recently undergone Terrigenesis, and he and Sif tried to convince S.H.I.E.L.D.'s director Phil Coulson to hand her over to them. Coulson refused, and Skye escaped to the facility's jail cell, but Vin-Tak and Sif chased after them. Agent Morse, however, managed to distract Vin-Tak away from Skye. During their fight, Agent Morse got her hands on Vin-Tak's truncheon and erased his own memories with it. The two aliens eventually agreed to let Skye stay on Earth. Sif took Vin-Tak back with her to Asgard, promising to give him safe passage back to Hala.

Retrieved from "https://marvelcomicsfanon.fandom.com/wiki/Vin-Tak_(Earth-1010)?oldid=127490"
Community content is available under CC-BY-SA unless otherwise noted.