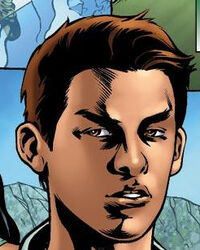 Victor von Doom was born in Latveria and brought to the United States of America at a young age. In ninth grade, Victor attended a school field trip to a laboratory. He snuck off since it was the lab his father, Werner, worked at. He ran into fellow students Jonathan Storm and Mary Jane Watson, who had also snuck off, and convinced them to accompany him to his father's personal lab. Victor had them watch from the doorway as his father opened a dimensional breach. A stream of cosmic rays came out of the portal. A few days later, he collapsed in his family home and fell into a coma. He hasn't been seen since.

Retrieved from "https://marvelcomicsfanon.fandom.com/wiki/Victor_von_Doom_(Earth-774237)?oldid=187267"
Community content is available under CC-BY-SA unless otherwise noted.