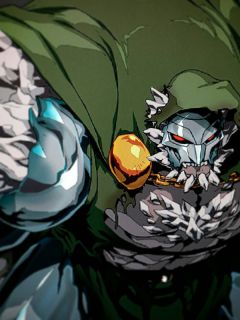 Earth-68014
Base Of Operations
The Outside
Characteristics
Gender

"Doom kill! Doom kill you all!"

Victor von Doom spent years battling against the Fantastic Four and the Avengers, constantly facing defeat. Becoming fed up with losing, Doom turned to enhancing himself, but took it one step too far. He experimented with gamma radiation, his hubris leading him to believe he could understand it in a way that Bruce Banner never could. But Doom was wrong. He mutated into a mindless monster, hellbent on revenge and destruction.

Doom was later recruited into the Renegades by Odin, who needed people who would obey him. Doom followed Odin during his reign, and stuck with the Renegades following his death. He was later present with the Outsider bitted the two teams against each other, and Doom was successful in skewering Captain America. He soon gained an advantage over the Outsiders, but after they started working as a team, Firestar, Polaris, Colossus, and Sabre were able to overload him with energy, and obliterate his body.

Retrieved from "https://marvelcomicsfanon.fandom.com/wiki/Victor_von_Doom_(Earth-68014)?oldid=244652"
Community content is available under CC-BY-SA unless otherwise noted.