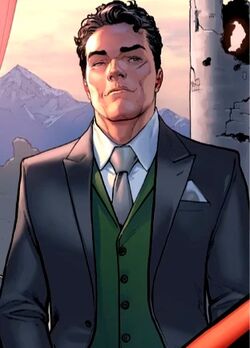 Black
Unusual Features
Prior to the restoration of the multiverse, most of skin was completely mechanical in appearance, along with burnt scars on his whole face
Status
Citizenship

I'm afraid the villainous identity you are looking for is now, dead... "Doctor Doom" is nothing but a failed concept now, previously crafted by a frightened man who tried to flee away from the scars of his miserable past... That man was me, of course... But not today. Today, I am no longer the man who I supposedly was... Today, I'm different...

Victor von Doom was born to the Latverian doctor & industrialist Werner von Doom and the former gypsy witch Cynthia, in the city of Haasenstadt, Latveria at some point during the early 1970s. At some point in Victor's early childhood, his father revealed to him that he was descended from Vlad Tepes Dracula, whose descendants were scattered across Europe. The young Victor would find it fascinating about this discovery, but upon growing up, Victor has yet to find any purpose for knowing his heritage, in the meantime. Only a few years have passed, the now (seemingly) orphaned Victor was brought to the United States of America and began studying at the Baxter Building, a government think-tank of young geniuses, such as Reed Richards and Susan Storm.

Growing up into early adulthood, Victor would also strive and work so hard, along with the support from the riches left by his parents, he potentially achieved becoming a billionaire industrialist once he's finished with the Baxter Mission, earning the infamous relationship as the oldest rival and frenemy of fellow young genius he grew up with, Reed Richards. In addition to helping the funding and improvement of Richards' trip to the Negative Zone as an act to spread his presence within the Baxter Building even further, he had also accompanied the future founding members of the Fantastic Four. He received superpowers in the same accident that created the Fantastic Four, the very people who he was destined to despise in his awaiting fate.

As the cosmic expedition went horribly wrong, the five were infused with several unique abilities by the cosmic rays exposure to the rays, which imbued Doom with a variety of energy-based powers, and along with it, an injury caused by a piece of irradiated shrapnel from the shields intended to protect the station steadily began to mutate his body into an organic metallic alloy hide (with a somewhat reduced ability to perceive tactile sensations and pain). However, this destructive process deformed his face, so the worsening Doom furiously donned a slightly unfinished but efficient metallic mask of his own design in order to hide his already scarred face by the time they returned into the real world.

After returning back to the prime reality, the four would later band together battling extraterrestrial-related threats coming from the anomalies of the Negative Zone, including Victor himself who now went insane and has gone obsessed with power after gaining superpowers as well, becoming the ultimate villain and later, the dictating ruler of the Kingdom of Latveria, known as the self-proclaimed Doctor Doom. Pretty much unmatched and unrivaled in most of every manner, the great Doctor Doom would have many conflicts with both earthly and cosmic super-beings across the greatest depths of the cosmos, although he would always be known as the never-ending nemesis, but sometimes the situational allies, of Reed Richards and the heroic Fantastic Four.

Encounters from the Skrull Kind

The Fantastic Four were suddenly approached by their arch-nemesis, none other than Doom himself, who unexpectedly asked for the heroes' help, something he preferred calling his action a "reluctant request". The four were confused, especially Reed, asking him what kind of help does Victor need from them. Victor responded that he wouldn't even consider the four's help, if it wasn't for the sake of saving his own country, Latveria, and the rest of the world from an impending doom. The heroes then asked what was coming, to which Doom replied, "An invasion," confusing and surprising the four at the same time, though it was revealed that Doom had been studying extraterrestrial life since the Chitauri Invasion, leading to him making a theory about Earth being a frequent target for alien colonization after discovering that an ancient powerful species known as the Skrulls has been watching Earth and has attempted on colonizing it since the dawn of history. Doom then told them that the Skrull have been doing it every next thousand years, and now believes that they're coming to Earth, once again, although they have yet to know who the real responsible perpetrators were in contacting the Skrulls, and he had no other choice now that he needed their very help to stop another invasion from ever occurring, and at the same time keep this shocking discovery between them in the meantime to avoid mass panic and hysteria.

Some of the Skrull spacecrafts somehow found its way onto Earth, crashing into several locations all around the world, most notably the Kingdom of Latveria and the Kingdom of Wakanda, as Doom has suspected and predicted for it to actually happen. However, most of them were unfortunate on their ships' crash landing, having most of the Skrulls to perish as they have roughly crash landed into rocky terrains and fathomable oceans where no one gets back from. Nevertheless, those who did survive did proceed with their true intentions of exterminating and decimating Earth's entire race and life, who they have mistakenly taken as a rival species, daring to challenge them in becoming the far more superior species in the entire universe. After having to immediately know about their impending arrival on Earth, the Fantastic Four, even the Wakandan monarch Black Panther and the Subterranean ruler Arthur Molekevic (more commonly known as the on-and-off rogue Mole Man), has finally decided to help Doom in preventing another alien invasion from the hands of the Skrull Empire, a domain that the heroes and villains have only recently discovered its existence.

In the wake of the cosmic catastrophe due to the Mad Titan Thanos' victorious decimation, Doom's Latveria suffered a great loss, rendering half of the Latverian population to fade away into dust. In the aftermath of Thanos' decimation through the conquest of obtaining all of the six Infinity Stones, however, Doom was luckily one of the many countless people across the universe who randomly survived when the Mad Titan had finally snapped his fingers, killing half the life of the universe, albeit much to Doom's and some of the surviving Latverians' distraught who miraculously continued to exist and survive the decimation of half the population of the universe. Enraged and confused by the unexpected loss of his many people, Doom tried to confront his old friend and mortal archnemesis Reed Richards in the Baxter Building to know what was going on, only to find the unexpected. Arriving at the Baxter Building, Doom found himself more perplexed after finding the only surviving member left among the Fantastic Four: Ben Grimm, the Thing.

At first, a grieving and devastated Grimm attacked whom he thought was Doom by the second he saw his face, but Doom, the genius that he was, revealed to Grimm had he was smashing a Doombot all along which he had already demolished to smithereens, knowing that negotiating with Ben at his weakest would be a terrible idea. Doom tried calming Grimm down, sincerely admitting that he's in peace, although Grimm remained stubborn and tried to attack the real Doctor Doom. After a reluctant brief but brutal brawl within the ruins of the Baxter Building, Grimm still ended up victorious against Doom, although the former realized that the latter was being true to his words at the very moment he came to him (and the fact that Doom was not fighting back), forcing Grimm to end the brawl out of exhaustion, but not guilt since he's still holding grudge against Doom.

After their confrontation, Grimm explained everything to Doom about the failure of the Ultimates to prevent Thanos from obtaining the last Infinity Stone in Wakanda, thus making his quest an absolute success which leads to the universal decimation. In the aftermath of the decimation, the remaining members of the Ultimates were joined by other surviving members which included Grimm, and even Doctor Doom as their situational ally as they tried to maintain order on Earth and the wider universe that was still recovering from the aftershocks of Thanos' devastating and presumably irreversible actions. Along the way, Doom, who was now a part of the interstellar sect of the Ultimates, would eventually find himself being encountered by the cosmic messiah Adam Warlock, to which the latter willingly recruited Doom to be a part of his mission, a mission to reverse Thanos' decimation.

However, as almost more than five months have passed, the successful alliance of the surviving heroes, antiheroes, and several redeemed villains (which included Doom himself, who was now a member of the Infinity Watch at the time), aided by the Cosmic Entities, battled Thanos. In the process, he overlooked his adoptive daughter Nebula who was able to wrest the Infinity Gauntlet from Thanos' hand. Her first significant act was to undo all that has occurred, which inadvertently freed the heroes and the cosmic entities and completely resurrected those who have once withered away into ash by the Titan's decimation. The battle resumed with Nebula's raging hatred towards Thanos in her attempt to kill him for good, and in the end it was Adam Warlock who finally possessed the Gauntlet, ending the cosmic conflict for the Infinity Gauntlet, for now.

Adam Warlock's evil and notorious side, whom was dubbed by his followers as the "Magus," had unexpectedly separated from his own body thanks to the Universal Church of Truth, his oldest radical followers, and started his own personal crusade to reassemble the recently-dismantled Infinity Gauntlet. In his process, Magus created doppelgangers of Earth's heroes, and even Thanos' own duplicate, as a part of his plan to recreate the universe into his own image, a universe of eternal and infinite wickedness. In the very end of the conflict, Warlock and the rest of the Infinity Watch (including the Mad Titan Thanos) had successfully defeated the Magus through the help of their extensive ally, the Goddess (who also happens to be Warlock's good and noble portion), putting him in a catatonic state after he was finally imprisoned inside the Soul Stone's realm, the Soulworld, before parting ways as Warlock disbands the Infinity Watch, at least for now.

Human Mutate Physiology: As a result of being exposed to the same cosmic storm that gave the Fantastic Four their unique powers, most of his body was transformed into an organic metallic substance, stronger than titanium or steel and harder than diamonds", and gained related and unrelated powers Doctor Doom was introduced to the mystic arts by his mother (who was of Romani and Latverian blood). He would further develop his already supreme abilities by traveling through time in rare cases and learning lost magical scriptures throughout history:

Retrieved from "https://marvelcomicsfanon.fandom.com/wiki/Victor_von_Doom_(Earth-61615)?oldid=235866"
Community content is available under CC-BY-SA unless otherwise noted.