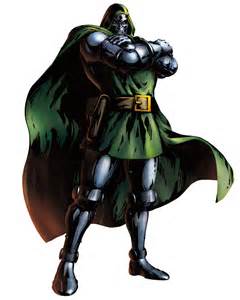 Single
Occupation
World destroyer, Monarch of Latveria, scientist, would-be conqueror
Education
College studies in the sciences (expelled before degree completion); self-educated to graduate level and beyond in most sciences; self-taught knowledge of the mystic arts of magic
Origin
Origin
{{{Origin}}}
Place of Birth
A Romani camp outside of Haasenstadt, Latveria
Creators

The history of Doctor Doom of Earth-6109.2 appears to have the same history as his mainstream counterpart until some years before the outbreak of the superhero Civil War. This Doom made an alliance with Loki, Ultron, Baron Mordo, the Enchantress, and at least 21 other supervillains to once again form Masters of Evil.

Doom's plan was to distract S.H.I.E.L.D. with an attack on the S.H.I.E.L.D. Helicarrier while the Masters of Evil stole the super soldier serum and Mutant Amplifier from S.H.I.E.L.D.'s Omega Base. He then kidnapped Jean Grey and Nightcrawler and stole a magical text the Tome of Asarius. Using the Tome of Asarius and the Mutant Amplifier he forced Nightcrawler to teleport himself and his fellow Masters of Evil into Mephisto's Realm where he was able to acquire a powerful magical artifact the Twilight Sword. He next used the super soldier serum to create an army of bestial super soldiers which with Loki and Enchantress' help he unleashed upon Asgard. With help from the frost giant Ymir he was able to draw Odin out into the open where he defeated him in combat using the awesome powers of the Twilight Sword. With Odin defeated he used his magic to drain the Odinforce from Odin transforming Doom into a god with nigh unlimited control over reality. Using his powers he quickly took over the world and converted most of the world's superheroes into mind controlled slaves who worshiped him as a god. He also created evil clones of the Fantastic Four, Spider-Man, Captain America, and Thor and imprisoned Odin in Castle Doom.

Eventually a team of superheroes who had escaped Doom through the intervention of Uatu were able to defeat doom and drain the Odin force from him using technology stolen from Galactus. With Doom mortal once more and Odin free of his imprisonment Odin captured Doom and Loki and imprisoned them in Asgard where they would face eternal torment and torture for their crimes against the gods. In the aftermath the people of Earth who were free of Doom's control assumed that Doom was dead, only those super-heroes involved knew the truth.

Following the Masters of Evil incident, Latveria came under the control of Lucia von Bardas.

Retrieved from "https://marvelcomicsfanon.fandom.com/wiki/Victor_von_Doom_(Earth-6109.2)?oldid=128954"
Community content is available under CC-BY-SA unless otherwise noted.