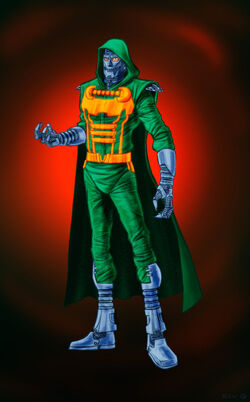 Single
Occupation
Adventurer
Origin
Origin
Teen mage plucked for the Banished while trying to save his mother's soul.
Creators

I have many names. I prefer you call me Victor. But if you must... call me Doom.

Victor's history remained unknown to the viewing audience for some time. However, after it was revealed he was from Earth-110, it can be assumed it is the same as that of apparently himself. He was manipulated by Reed Richards using his advanced technology. He was de-aged, mind-wiped, and sent back in time and place to his early childhood. He then remembered his life as losing his mother to Dormammu, and worked on creating an armor and mastering his sorcery to defeat him, and eventually become a hero.

Sorcery: Victor has some training in magic, and could have made it to great distances, but stopped due to respect for Magi. He currently exploits a few feats:

Superhuman Intelligence: Victor has intelligence surpassing that of the average human.

Equipment: None known.
Transportation: None known.
Weapons: Armor: Victor currently utilizes armored gauntlets and boots. They afford him these abilities:

Retrieved from "https://marvelcomicsfanon.fandom.com/wiki/Victor_von_Doom_(Earth-110)?oldid=59700"
Community content is available under CC-BY-SA unless otherwise noted.