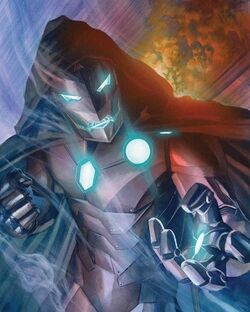 None may disrespect Doom. Doom... knows all.

Victor von Doom was born into poverty in the hunger-stricken European nation Latveria. His father died of malnourishment when he was a child, which resulted in him becoming very close with his mother. However, she would eventually be claimed by Mephistopheles after she sold her soul to ensure Victor's survival. Consumed with anger and grief, Victor dedicated his genius to conquering the worlds of both science and sorcery to one day save her soul and conquer the world that had slighted him.

Victor's journey took him to the United States of America, where he enrolled in MIT. He was assigned to be roommates with Reed Richards, who Victor took an immediate disliking to. He was extremely irritated by Reed's constant corrections of his calculations, which Victor took as a direct insult to his intelligence.

Reed eventually discovered that Victor was trying to build a device that opens portal into Mephisto's Realm, and reported it to the University. Enraged, Victor tried to activate it before he could be expelled. Unfortunately, his calculations were off and the machine malfunctioned and exploded. The resulting explosion severely burned Victor's face, which severely affected his self-image.

He then escaped the notice of the authorities and left the United States. He then traveled to Tibet where he met a pack of monks who practice a forbidden form of sorcery. He then studied with them for an extended amount of time, and recreated himself under the alias of Doctor Doom, and had an iron mask branded onto his face to cover up his scars.

Determining his new purpose in life was to bring balance to the world by bending it to his knee. To begin his quest, Doctor Doom returns to Latveria and murders its oppressive Emperor, claiming power for himself. Using his genius and the sorcery at his disposal, Doom ushers in a new age of peace and prosperity that Latveria had never seen.

Doom later went on to develop an army of Doombots to serve as Latveria's private police force and his own personal militia that would bend to his whim. His personal favorite Doombot was a life like artificial intelligence he named Lucia. Lucia would eventually show Doom a new broadcast of the superhero team the Fantastic Four, led by Doom's rival Reed Richards. However, he was slightly more interested in the fact that one of its members was his ex-lover, Susan Storm, who he had known during his travels across America.

HIs plans then slightly evolved to include making Susan his bride and turning the rest of the Fantastic Four into his servants. He would then enter into several conflicts with the team, and later found himself clashing with the Avengers. Over time he became fed up with the constant interference from the so-called heroes and decided to put together an organization of like minded people from across the world who shared him grievances called the Cabal.

Retrieved from "https://marvelcomicsfanon.fandom.com/wiki/Victor_von_Doom_(Earth-101)?oldid=247476"
Community content is available under CC-BY-SA unless otherwise noted.