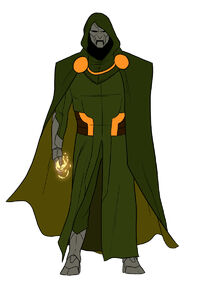 I've always hated you Reed, and now with the power I have I can kill you. Oh, and it's Doom now.

Victor was born to a Monarchy of a family who ruled Latveria for generations, Victor was set to also rule Latveria after he turns twenty-one.

Victor attended Oxford University and earned many doctorates. Victor decided he didn't want to rule Latveria and wanted to be a scientist so he abandoned Latveria and moved to the United States.

Approached by the army

Victor was approached by the army to replicate Abraham Erskine's Super Soldier formula, the serum that created Captain America. After agreeing to take on the project, he was introduced to Reed Richards and Sue Storm, the scientists who would be helping him in the project.

Victor would grow jealous of Reed due to his feelings that had developed for Sue and eventually develop a hatred of him after the two had gotten engaged.

Approaching a dead end, Richards came up with the idea that dark matter and extra-dimensional energies can be the key to unlocking the secrets to the Super Soldier Serum, the army granted the three the funds to build a state of the art ship to look for wormholes near the moon's atmosphere, Richards called in his childhood friend and state of the art engineer Ben Grimm while Sue called her younger brother Johnny to help build the ship. After it was built, the five went to investigate the wormhole but were sucked inside of it being basked in the dark matter and extra-dimensional energies.

Victor later awoke to see he was burning up on reentry into the Earth's atmosphere, Victor didn't feel any pain and crash landed in Latveria, Victor got up to see his skin was covered in metal. Horrified at this revelation he returned to his ancestral home to find out he had been gone for two years and that Reed, Sue, Ben and Johnny had also developed powers and become celebrities.

Victor spent a few weeks mastering his powers, the dark matter and extra-dimensional energies also tampered with his mental stability, to the point it made Victor want to end Reed's life.

Victor, now calling himself Doctor Doom, would develop an army of drones and would send them to the Baxter Building to kill Reed. He later discovered that the Fantastic Four had survived the attack and knew that they would eventually come for him.

Doom was indeed right as the Fantastic Four arrived. Reed and Sue were relieved to see he was alive, Victor explained that he only just came back to Earth and his metallic skin saved him from burning up on re-entry to Earth's atmosphere. Ben then asks why he tried to kill them to which Victor replies with "I've always hated you Reed, and now with the power I have I can kill you. Oh, and my name is DOOM!" he then emits a mass of electrical energy and hurls it toward Reed, it hits him and knocks him out cold. Ben immediately begins attacking Doom, Ben is shocked by Doom's advanced strength and notices that his metallic skin has increased his strength.

Johnny goes to find Ben and Doom fighting outside, seeing Johnny as the wildcard, Doom immediately destroys a fire hydrants and blasts it toward Johnny infused with his electricity. It cools Johnny's fire out while electrocuting him causing Johnny to also go unconscious. Reed, now awake exits the castle with Sue and begins attacking him alongside Ben. Reed dodges an incoming attack from Doom and wraps himself around him restraining him. Ben uses this as an opportunity and punches Doom square in the face and sends him miles.

Superhuman Strength: Doom possessed superhuman strength, the level of which is unknown. He is strong enough to gain the upper hand in a full on fist fight with Ben Grimm.

Regenerative Healing Factor: Doom possesses a regenerative healing factor, the extent of which is unknown. He was known though to be unable to heal from injuries caused by his own body, such as from his porcupine like-quills.

Toxic Gas Expulsion: Doom is able to expel the remains of his internal organs as poisonous gas.

Porcupine-Like Quills: Doom is able to grow porcupine-like quills from his forearms, which he could fling as offensive projectiles.

Electrokinesis: He can absorb and fire bolts of electrical energy. He can absorb electrical energy from various sources. He electric bolts are of such strength that they leave a gaping hole in a normal human's body and are capable of blasting away the Thing and consequentially generates such intense heat that it can melt or even vaporize solid steel. He can seemingly even control electricity within electrical circuits, as whenever he become emotional electrical devices around him worked erratically.

Super-Genius Intelligence: Doom held multiple doctoral level degrees. Doom is a child prodigy and scientific genius though unlike Richards he approached science as an art rather than as a system.

Retrieved from "https://marvelcomicsfanon.fandom.com/wiki/Victor_Von_Doome_(Earth-1111)?oldid=163204"
Community content is available under CC-BY-SA unless otherwise noted.