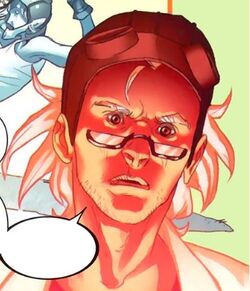 The Wise Men (with his spouse)
Identity

The twelve of us joined The Pride because we each wanted one of the Gibborim's six tickets to paradise for ourselves. We never would have given up that shot at eternal life if my wife hadn't become pregnant...if all of us hadn't decided that needed little ones to share our empty mansions with. But it was years ago that we agreed to donate our chance at immortality to those six kids. Back then, none of us imagined that we would ever want to live forever. Surviving to an age like forty sounded like an eternity already, more than enough time to enjoy all the Gibborim had granted us. But now we're old men, rapidly approaching the Final Wave, and the ungrateful brats we sacrificed everything for have abandoned us. Admit it, some nights, you think about letting your son perish with the rest of this wretched populace...and taking his spot in the Next World for yourself.

Victor Stein's origin is the same as that of his Earth-616's counterpart.

Retrieved from "https://marvelcomicsfanon.fandom.com/wiki/Victor_Stein_(Earth-1010)?oldid=220640"
Community content is available under CC-BY-SA unless otherwise noted.