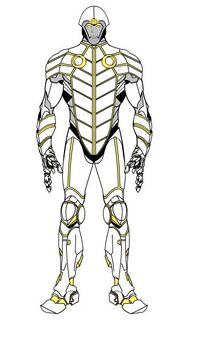 No Hair
Unusual Features
Android, Can alter his form into others very easily
Status
Citizenship

Originally, AIM stole the Vision android from Hank Pym's lab at van Dyne Industries. Vision was the first of Pym's two creations for Project: New Vision. After AIM stole Vision, Hank, believed that Stark had the Vision stolen so that he could incorporate its tech into a new Iron Man armor. Due to this suspicion, Hank would sue Tony Stark. While waiting for the suit to settle, he would recreate the Vision in an improved model. This model would go on to become Ultron.

Vision can lift normally 5 tons, at maximum density he can lift 75 tons.