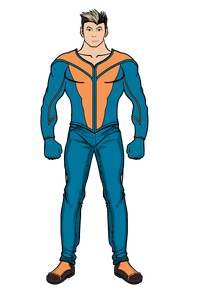 Relax, honey. When Victor von Doom is in charge, everything is under control.

Victor Domashev was the illegitimate son of the King of Latveria. His mother, Aerwyna was a woman of mystery. She'd been considered by many to be an actual witch, who used her power to seduce King Vincent. However, the kind and benevolent King of Latveria recognized Victor as his son and the young boy received all the privileges his legitimate siblings did. Soon it'd become clear that Victor was a child prodigy, who excelled at every school subject.

After his 20th birthday, Victor was approached by a mysterious woman who introduced herself as his mother. Aerwyna revealed to him that she was not a witch, but an extraordinary being coming from a realm named the Negative Zone. And on top of that her brother, Elwin was the ruler of that place. The inhabitants of the Negative Zone were forbidden from leaving their world, but Aerwyna, intrigued by the idea of seeing the other worlds, frequently left to see them and then came back as soon as possible. However, Elwin soon discovered about her wrongdoing and ordered to punish her.

Having narrowly escaped, Aerwyna found herself on the Earth, where she was finally safe and no longer threatened by Elwin's wrath. She soon met King Vincent and the two of them fell in love with each other and Victor was the result of their affair. Victor tried to persuade his mother to take him to the Negative Zone, but she flatly refused.

Journey to the Negative Zone

At some point, Victor approached Carol Danvers, a student of a flight training school, who claimed that she had witnessed her best friend, Jennifer Walters, disappearing into an interdimensional portal. Thinking that she could be stuck in the Negative Zone, he asked Aerwyna to help them find the missing girl. She initially refused but finally relented when Victor agreed to take his bodyguard, Daniel Rand with them. The three of them teleported to the Negative Zone. While exploring it, they were caught by the guards and thrown in the dungeon.

When the heroes found the missing student in the dungeon, they were horrified at their discovery. Jennifer Walters was no longer a human, but a green-skinned monster. Having not recognized the trio, Walters attacked them, but Rand managed to subdue her. After returning to her human self, Jen was relieved to see her best friend again and the two of them hugged. Soon Rand discovered that he was changing too. His strength, speed, stamina, agility and reflexes all greatly intensified. Danvers then accidentally set the room on fire and realized that she could control four elements: fire, water (ice), earth, and air. Domashev could now move things with his mind as well as become invisible and fly.

After travelling back to the Earth, it dawned on the team that they could not return to their daily life, not when they don't have full control over their powers. Aerwyna volunteered to teach them how to control their new abilities. After a few months of training, she discovered something terrible. Leading a huge army, Elwin arrived on the Earth and sent his troops on a rampage. With the help of Aerwyna, the Four managed to stop the invasion and defeat Elwin, who seemingly died during the battle. The media congratulated the heroes on saving the day and called them Fantastic Four.

He is at peak physical strength for his age.

Concentration: The size, number, and movements of these objects are limited only by his powers of concentration. Once he stops concentrating on an object, it ceases to exist.

Retrieved from "https://marvelcomicsfanon.fandom.com/wiki/Victor_Domashev_(Earth-7535)?oldid=258472"
Community content is available under CC-BY-SA unless otherwise noted.