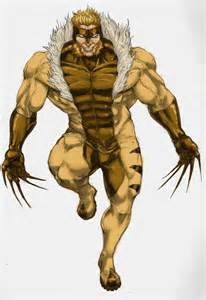 Blonde
Unusual Features
Sabretooth has elongated canines (fangs), claws at the tips of his fingers and toes, and vertical pupils.
Status
Citizenship

In a later occasion, Sabretooth became involved with a group responsible for the killing of Wolverine's wife Itsu and the abduction of her son. These events have been uncovered by Wolverine's recent regain of his full memory.

Sabretooth eventually had enough of Romulus and decided to track down Wolverine himself. He came across Magneto and his Brotherhood of Mutants. Creed accepted Magneto's offer to join. Magneto said that his old friend Professor Charles Xavier was in Canada. Sabretooth went ahead, suspecting that Wolverine was there.

Creed found both Xavier & Wolverine, but unexpectedly, also Wade (who called himself Deadpool after he got Wolverine's healing factor) and proceeded to attack Wolverine. Deadpool eventually had Creed at gunpoint, but he escaped.

Class 10. Able to lift in 2 - 10 ton range , however the extent of his continuously enhanced strength was never revealed.

Sabretooth was vulnerable to the Muramasa Blade. The sword, which was constructed through some means with the use of a piece of Wolverine's own soul, had the ability to greatly nullify the efficiency of an accelerated healing factor.

Equipment: Adamantium Laced Skeleton: several times Sabretooth has had his natural mutation boosted by having his bones and claws laced with the indestructible synthetic metal known as adamantium. Weapon X had been reinstated and captured him to commence with said molecular lacing procedure as well as kick his strength, speed and healing factor up a notch. But unlike Logan, Sabretooth's bones did not have adamantium laced cartilage and ligaments meaning that his bones could be severed at the joints.
Transportation: None known.
Weapons: Throughout his life, Sabretooth has wielded many different types of firearms throughout his careers as a soldier, a mercenary, assassin, and a spy.

Retrieved from "https://marvelcomicsfanon.fandom.com/wiki/Victor_Creed_(Earth-727)?oldid=261225"
Community content is available under CC-BY-SA unless otherwise noted.