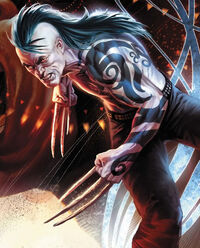 I've been waiting years for this.

Victor was the result of an affair between groundskeeper, Thomas Creed and Elizabeth Howlett. After his birth, Elizabeth neglected Victor and pretended he never even existed, this would bother him growing up. Things would be even worse as Victor was abused by his alcohol father.

To complicate things more, at two years-old, his mother would go on to give birth to another child and the heir of Howlett Estate; James. Although, Victor would go on to befriend James as children and would develop a close bond. As they reached adolescence, the abuse inflicted upon Victor warped his mind and turned him into a cold and bitter man like his father which would result them being kicked from the estate.

Thomas; Victor's fathers, in a drunken stupor and armed with a shotgun, invaded the Howlett Estate with his son and attempted to take his former lover Elizabeth with him. John, attempted to stop him and Thomas shot him in the head, in cold blood. James entered his father's room to see the commotion, the rage and the stress of the situation caused the thirteen-year-old James' mutation to activate; bone claws extended from the backs of his hands and he attacked the intruders with uncharacteristic ferocity, killing Thomas. Suffering a mental breakdown Elizabeth called James a monster and told him and Victor to leave, she would later take Thomas' shotgun and shoot herself.

After watching his father murdered in cold blood, Victor became enraged and his mutant ability began to manifest; two bone claws from the back of his hands emerged and a single claw would emerge from his wrists. Seeing red, Victor attacked James. The two engaged in a fight but James would eventually temporarily blind Victor and escape into the woods, Victor's eyesight would heal and he would then swear to find and kill James one day.

As an adult, in the 1980s. Victor would earn money doing jobs for high paying organizations. One of these missions would include him meeting Nick Fury, a soldier in the military.

While on a job, Nick Fury and his black ops team would attempt to stop him from completing his mission, Victor, now going by the codename Sabretooth would massacre Fury's team and claw out his eye.

Taking residence in the Savage Lands

In the 1990s, Sabretooth began hearing rumors of a Mutant haven called the Savage Lands. Sabretooth used his advanced tracking skills to discover if the rumors were true.

Upon arriving he was greeted by its leaders Erik Luu and Charles Xavier and they welcomed him to the Savage Lands, Victor decided to take up permanent residence here.

Erik began growing egotistical and his hatred for the humans increased, Erik believed that mutants were indeed the next step in human evolution and humans were neanderthals that needed to be enslaved. Erik would approach Victor and other mutants who hated humans as much as he did and ask if they wanted to join him in his attacks on humanity, Victor agreed without hesitation.

After Charles and Erik fell out, resulting in Charles leaving the Savage Lands, Erik now going by the name of Magneto would name his followers and himself the Brotherhood of Mutants. For the next few years Magneto led the Brotherhood in an anti-human campaign of political assassinations and terrorist bombings.

In 2014, Magneto's daughter Wanda would join the Brotherhood. Later on Charles would resurface and had formed a team of Mutants named the X-Men and would begin interfering with their terrorist acts.

In the Savage Lands, Sabretooth would discover his half-brother, Wolverine was experimented on in the Weapon X project by Hydra and S.H.I.E.L.D. and demanded he and the Brotherhood go to the abandoned facility, to see if there's anything he could use to kill Wolverine or even lace his skeleton with vibranium as well. Magneto agreed to this as it could also prove useful to the Brotherhood as well.

So the Brotherhood venture to the Weapon X facility. Sabretooth would find some remnants of liquefied vibranium, without even speaking Magneto knew what Sabretooth wanted. After a few days of trial and error, Magneto successfully managed to infuse Sabretooth's bones with vibranium with his magnetokinesis. Seeing nothing of use with the remnants of the Weapon X facility, the Brotherhood begin to leave until suddenly Sabretooth catches a whiff of Wolverine's scent and goes into a frenzy, following it, discovering Wolverine and attacking him. He engages in a brief fight with him until Magneto orders him to stop.

The Brotherhood then come face-to-face with the X-Men. Magneto then greet the X-Men mockingly and accurately guesses that the X-Men are here to help Wolverine regain his memories, Wolverine asks who Sabretooth is and why he has claws like Wolverine's. Sabretooth laughs maniacally and reveals himself to be Wolverine's brother.

The X-Men begin to battle the Brotherhood. Wolverine and Sabretooth begin battling each other in more of a personal vendetta, their personal fight takes them away from the overall battle. Sabretooth begins gaining the upper hand on Wolverine and comments on how he was always weak and he'll pay for killing his father. Wolverine begins fighting back as hard as he can, never fighting anyone like Sabretooth before, his sudden rush of past memories begin returning to him and remembers a bit more of his past. Wolverine then remembers his father was killed by Sabretooth's father and enters a berserker rage, destroying Sabretooth and temporarily blinding Sabretooth like he did when they were children many years ago. Knowing he can't kill Sabretooth and that he is mortally wounded and will take a while to heal, Wolverine returns to help the X-Men combat the Brotherhood.

The battle would eventually come to a stalemate after Quicksilver injures Scarlet Witch and Magneto, being a concerned father retreats. The X-Men return to the X-Mansion revealing the news to Xavier. The Brotherhood would recover the broken Sabretooth and would return to the Savage Lands. Taking about a full day to heal from his wounds Wolverine gave him including the recovery of his eyesight and broken jaw. Sabretooth would then discover that his healing factor has slowed and is adapting to his vibranium skeleton.

The Brotherhood would be forever changed following this encounter.

Able to lift in 2 - 10 ton range , however the extent of his continuously enhanced strength was never revealed.

Retrieved from "https://marvelcomicsfanon.fandom.com/wiki/Victor_Creed_(Earth-1111)?oldid=200150"
Community content is available under CC-BY-SA unless otherwise noted.