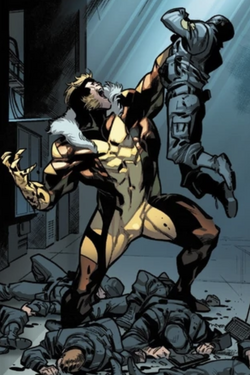 Listen here, runt, no amount of fancy metal bones is gonna stop me from tearing you limb from limb.

Born to wealthy land owner, James Logan, and young peasant girl, Alexandra Creed, Victor was sadistic and ruthless from birth. In his spare time he liked burning bugs and skinning cats. Eventually, his father discovered that he was had sired the "creepy peasant boy", he made it his mission to train Victor how to be a gentleman.

This resulted in Victor becoming friends with the young man James Howlett, who Victor eventually discovered was actually his cousin. This discovery, in addition to both James and Victor mutating into feral-like "monsters", led to the deaths of both of their parents and a riot chasing them out of town.

James and Victor then went on the run together, sneaking past the American border and working jobs as construction workers and security guards. Eventually, World War 1 broke out, and both of them were quick to sign up, as it gave them an excuse to let loose with their powers. It was there that Victor discovered his love for maiming and killing humans.

They would go on to fight together in several other wars, as their mutations kept them young. During the Vietnam War, their mutations were discovered and they were suspected to be spies.

After the firing squad failed to execute them, they were recruited by a man named William Stryker, who offered them a spot on his black ops team of mutants. It was working with Stryker and Weapon X where Victor, now going by Sabretooth, truly began to thrive. After James, now going by Logan, left the team, Sabretooth opted to stay and soon became Stryker's favorite operative, who was experimented on and enhanced multiple times.

Years later, after Sabretooth was ordered to bring Logan out of hiding, he killed his girlfriend, Itsu, and engaged in battle with him. Logan's rage led to him dismantling the entire organization by killing practically everyone involved, except Sabretooth, who made his escape.

Since then, Sabretooth sold his talents as an assassin until he was recruited by Magneto and Mystique recruited him to join the Brotherhood of Mutants. After fighting alongside them, Sabretooth came to realize that he'd been wasting his talents by working for humans, and that mutants deserved to rule the world.

Eventually, Sabretooth found himself propositioned by Mister Sinister to become even more powerful. He accepted, unaware of what he was getting himself into. After the procedure was complete, Sabretooth's mind had been overwritten by the Horseman of Famine, servant of Apocalypse. After multiple conflicts with X-Force and the Brotherhood, Sabretooth was eventually rescued by the Archangel, who broke free from his programming. After Sabretooth had his mind cleared by Jean Grey and Professor X, he rejoined the Brotherhood and recruited the young, lost former Horseman of Pestilence, Blink.

Retrieved from "https://marvelcomicsfanon.fandom.com/wiki/Victor_Creed_(Earth-101)?oldid=250245"
Community content is available under CC-BY-SA unless otherwise noted.