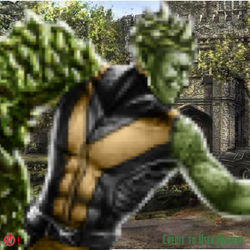 Victor Borkowski was born and raised in Fairbury, Illinois, he lived a normal life despite his reptilian features, a result of his being a mutant. The close-knit community accepted the boy for who he was until anti-mutant sentiment began to spread. For his own safety, his parents sent him to the Xavier's School for Gifted Youngsters where he quickly excelled academically, which led him to be part of the New Mutants.

Anole is a mutant with reptilian-like physiology including:

He was stated to be a Low Threat by the O*N*E.

Retrieved from "https://marvelcomicsfanon.fandom.com/wiki/Victor_Borkowski_(Earth-1010)?oldid=255334"
Community content is available under CC-BY-SA unless otherwise noted.