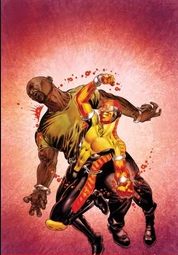 Black
Origin
Origin
Human mutated by a radioactive explosion and embedded with shards of the Infinity Fractal.
First appearance
Unknown

Born in 2000, Victor Alvarez was a computer engineer. He was impressed by his father's shades and would play with them. Growing up, he was told that Luke Cage and Iron Fist were the "Bad Guys". He had a good relationship with his older sister, who excelled in chemistry. He did very well in school, skipping a grade. (Presumably it was the fifth grade, since he rarely mentions it.)

One time in the third grade, he encountered the Hand. He was saved by the Heroes for Hire (Power Man/Luke Cage and Iron Fist). They were his childhood heroes. Secretly, he was trained by the two.

When he was ten, his mother was killed, and his father was incarcerated. Not having a choice, he traveled to K'un-Lun and finished his training. Every summer, he would travel to Harlem and would receive training from Luke Cage.

When he was 17, he returned to New York and visited his dad at a restaurant. His dad brought his shades. An explosion sparked, and Victor was closest to the Shades and was hit by the radiation from the explosion. Apparently, the shades had an Infinity Fractal in them, the most powerful one. It was split into five pieces, which embedded in his chest, wrists, and feet. His father was distraught, thinking he was dead. It was revealed Victor was alive as he was glowing red and yellow. He returned to Danny and Cage for help. That's when he finished his training.

When the year was 2019, he returned to home because his training was complete. Victor created glasses based on his computer skills and was inspired by War Machine as his glasses were similar to Iron Man's helmet's abilities. Danny further trained him, saying that Victor could access every ability and skill of every other Iron Fist that preceded him. Victor finally gained the abilities of the Iron Fist. Cage gave him a costume that resembled his old one. Victor created bracelets that could contain the power of the fractal. He received more training from both, so he was able to adapt to his enemies' fighting styles. Although it took him months, he finally took down Iron Fist in combat. He then was able to take down Luke Cage and Iron Fist together. His goggles also were able to make him look like anyone or anything he wanted. He was able to mimic weapons with his chi. He soon learned every ability of all the Iron Fists that came before him with the Infinity Fractals. Similar to Luke Cage, he named himself Power Man.

Infinity Fractal/Human hybrid: The explosion that killed many gave him abilities similar to his father's glasses.

Chi Manipulation: When he finally mastered his chi, and it combined with his Infinity Fractal abilities, he became one of the most powerful heroes known.

Red/Orange Iron Fist: This is very recent as he was able to absorb large amounts of chi energy as now that was his strength. He gained a new fist that that Red and orange colored surrounded with Purple energy. He gained new and different based elemental attacks.

Equipment: None known.
Transportation: None known.
Weapons: Goggles: Given to him by Luke Cage and Iron Fist. He can download information into his brain and it helps him work like a computer. A lot of times, he can make it seem like Cyclops's visor so it can stay on easier. He can hack into anything, even Iron Man's suit (something which Doctor Doom, Tinkerer, Ultron, and Reed Richards couldn't even do). He uses it to copy the abilities and moves, like Iron Man's Omnibeam, Black Panther's energy daggers, Psylocke's sword, etc. He was even able to learn a few of Captain America's fighting skills.

Retrieved from "https://marvelcomicsfanon.fandom.com/wiki/Victor_Alvarez_(Earth-161609)?oldid=230547"
Community content is available under CC-BY-SA unless otherwise noted.